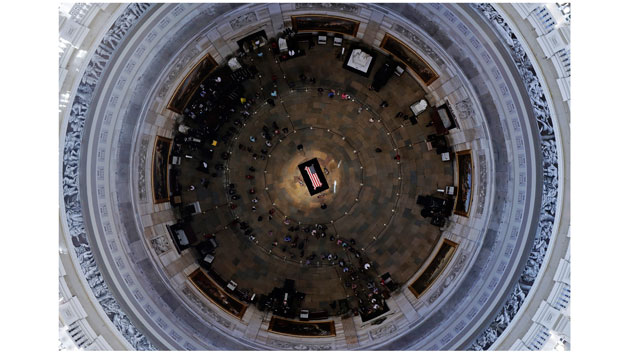 Morry Gash – Pool/Getty Images(WASHINGTON) — They came to Washington from across the country — and began lining up to pay their respects to John McCain at seven in the morning.
“He single-handedly saved my access to health care, and I could not be more grateful for that,” said AnnaMarie Farone, 33, a freelancer from Indianapolis and the first person in line for the public viewing at the Capitol Friday.
Farone, a self-described liberal who supported Barack Obama, has a degenerative disk in her spine and usually walks with a cane. She didn’t agree with McCain’s politics but said she valued his spirit.
“Through the worst of everything he was able to keep an incredibly optimistic spirit, and we need more of that,” she said. “He never tweeted about something instead of solving something.”
Brian Erdelyi, 46, a left-leaning Canadian living in Richmond, Virginia and working on cyber-security issues, said he wanted to pay tribute to McCain’s career and his values in public life.
“I think he showed a lot of integrity during his campaigning, and I think it’s sorely missing in today’s politics,” said Erdelyi, who was the second person in line.
The third person in line, a Virginia resident who works on national security issues for the government (and who only agreed to speak to ABC News if granted anonymity), described herself as “one of the original McCain-iacs,” a former campaign volunteer who dragged her two young children to McCain headquarters twice a week for ten months to help in his 2000 run for president.
The woman, who said she couldn’t identify with the GOP after McCain’s primary loss in 2000 and became a registered Democrat, said it’s “devastating” to lose McCain “at a time when we need him the most.”
One man, who said he was born in Vietnam and showed up carrying an American flag and wearing a red MAGA hat, said he was moved by McCain’s reconciliation with Vietnam after his imprisonment and torture during the Vietnam War.
Kris Wiebold, 61, a former federal worker from Berkeley Springs, West Virginia, who works for the Harpers Ferry Job Corps, said he wanted to show his support for McCain’s brand of moderate politics in a time of polarization.
“I had the honor of caring for veterans for close to fifteen years, and while I may disagree with some of his political beliefs, I can remember a time, kind of like in his ending letter, where we used to have a lot more civility in our politics,” he said.
Larry Hornstein, 64, a government contractor from Frederick, Maryland, said McCain "was a very civil person, very presidential in the way he handled matters, and we could use more of that today."
"He was the son of an admiral but he conducted himself like a regular sailor," he said.
Christina Ladd, 50, a political scientist from Falmouth, Maine, worked in press advance for McCain’s 2000 and 2008 presidential campaigns and met her husband through that work for McCain.
“As a young staffer, especially in 2000, he was so encouraging,” she said of McCain. “He didn’t let anybody regardless of their age or position on the campaign feel lesser.”
Ladd’s 16-year-old daughter Liberty, who traveled with her mother from Maine, said she is inspired to join the Air Force and eventually enter public service because of McCain, whom she met McCain as a six-year-old at a 2008 rally in Atlanta.
“He’s made such an important impact on our country that people my age definitely see that,” she said.
Greg Brock, 54, and Army veteran and communications professional from Myrtle Beach, South Carolina, also attended McCain’s arrival at Andrews Air Force Base Thursday night.
“To be alive and to be part of this weekend, it’s life-changing,” he said. “It’s something I’m going to tell my grandkids.”
Brock, who carried a photo he took with McCain at a 2000 rally in Jacksonville, Florida, said he is a “Trump backer 100 percent,” but was frustrated by President Trump's initial response to McCain’s death.
“Did Trump drop the ball? He deflated the ball,” he said. “I was offended, not only as a veteran, I was offended as an American. I’m glad he went back and corrected some things.”
“I wish he’d never done what he done. But that’s over with,” he said.
Copyright © 2018, ABC Radio. All rights reserved.