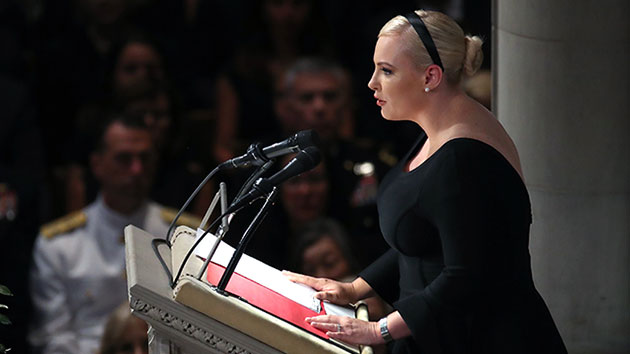 Mark Wilson/Getty Images(WASHINGTON) — "John McCain was defined by love," Meghan McCain, one of Sen. John McCain's daughters, said in an emotional eulogy to her beloved father.
"John McCain was not defined by prison, by the Navy, by the Senate, by the Republican Party or by any single one of the deeds in his absolutely extraordinary life," she said at Saturday's ceremony at the Washington National Cathedral.
"The best of John McCain, the greatest of his titles and the most important of his roles was 'father,'" she said.
"I am here before you today saying the words I have never wanted to say, giving the speech I have never wanted to give, feeling the loss I have never wanted to feel: My father is gone."

Through tears, Meghan McCain recalled a childhood moment when she fell off her horse and broke her collarbone.

After taking her to the doctor, she said her father made her get back on the horse.
Crying, Meghan McCain said she remembered the "pride and love in his eyes" in that moment he told her, "Nothing is going to break you."
While as a child she was furious, she said she is now grateful.
"The rest of my life, whenever I fall down, I get back up," she said. "Whenever I'm brought low, I rise."
"When my father got sick," she said through tears, she asked him what he wanted her to say in her eulogy.
Her father had replied, "Show them how tough you are."
Copyright © 2018, ABC Radio. All rights reserved.