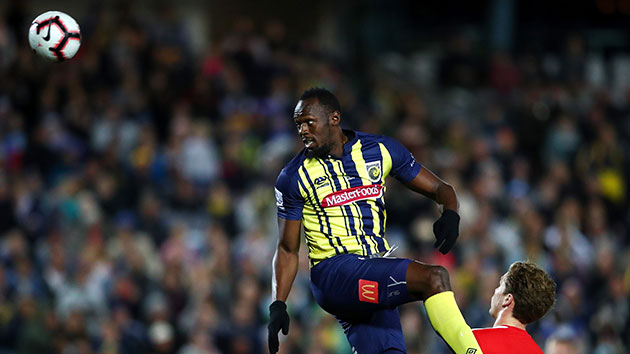 Cameron Spencer/Getty Images(SYDNEY) — Usain Bolt, eight-time Olympic gold medalist and world record-holder, begins his soccer career Friday for Australia's A-League Central Coast Mariners in a preseason match.
Bolt, considered by many the greatest sprinter of all time, has been training with the Mariners as he attempts to re-invent himself as a professional soccer player. The former Olympian begins an indefinite trial period as he seeks a contract.
Fans are eager to see if the speed and athleticism Bolt is known for will carry over to the soccer field, and more than 10,000 people are expected to attend the game, where Bolt hopes to play in the last 15 or 20 minutes.
This is not the first time a renowned athlete has attempted to segue from one sport to another.
Michael Jordan, former Chicago Bulls basketball legend, notably transitioned to minor league baseball in 1994. Jordan's stint in the minor leagues was largely underwhelming, and he returned to play for the Bulls in 1995, leading them to three more of his six total championships.
Tim Tebow, a former Heisman Trophy winner, is pursuing a career in minor league baseball after a short but polarizing NFL career. Though a fan favorite, it's unlikely Tebow will advance to the majors.
A smooth transition is possible, as evidenced by Renaldo Nehemiah, an Olympic gold medalist in track and field who went on to a Super Bowl-winning career as a wide receiver for the Dallas Cowboys.
Bolt's move has garnered massive attention for the Mariners, who ended last season at the bottom of the A-League. Some have questioned whether Bolt's attempted transition is a publicity stunt, though others believe he'll be an asset to the sport. Bolt has insisted he is serious about pursuing a career in soccer.
"The more I play, the more comfortable I get," Bolt said at a press conference, adding that he's still in the learning process.
Bolt, who is training as a forward, had his first full practice session with the team on Tuesday. He admitted to struggling with the speed of the game, but said he's committed to pushing himself and putting in the necessary work to improve.
"I expect to make mistakes, but I also expect to go there and make myself proud," Bolt said.
Mariners head coach Mike Mulvey confirmed that Bolt is still adjusting to the fitness required for the game, but called Bolt "determined."
"I'm quite pleased with the way he's progressing,” Mulvey said at a press conference, adding that even he couldn't predict the strides Bolt will make. "When Usain Bolt walks in a door, you don't know your standards."
Ricky Simms, Bolt's agent, also told ABC News that his client is progressing well. Adding that everyone on the Mariners has been extremely welcoming, Simms said, "He is looking forward to the next nine months here."
While Bolt is candid about his nerves before the match, he noted that the season doesn't officially begin until October, giving him time to focus and dedicate himself to improving.
"I know when I get on the field," he said, "I'm always going to push myself to the limit."
Copyright © 2018, ABC Radio. All rights reserved.