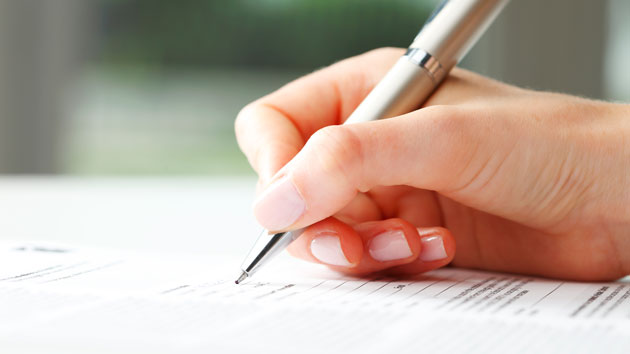 iStock/Thinkstock(WASHINGTON) — The United States Postal Service (USPS) apologized Thursday to a Democratic congressional candidate and former Central Intelligence Agency operative for "inappropriately releasing" a copy of her official personnel file she submitted to obtain a security clearance at the agency.
The USPS says the release of Abigail Spanberger's security file "occurred because of human error," and has requested that America Rising, the GOP-affiliated super PAC that originally requested the document, return the file.
"We take full responsibility for this unfortunate error, and we have taken immediate steps to ensure this will not happen again," USPS spokesman David Partenheimer said in a statement first reported by the New York Times and provided to ABC News, "The Postal Service has addressed the issue by providing clear instructions and guidance to our employees tasked with the responsibility for handling these requests, and we will follow up with additional training."
The Postal Service also offered an apology to Spanberger and said it intends to change the process for how requests for official personnel files are processed and handled.
"The privacy and security of personal information is of utmost importance to the Postal Service," Partenheimer added, "The Postal Service offers our sincere apology to Ms. Spanberger, and we will request the return of the information which we mistakenly disclosed."
America Rising was able to obtain Spanberger's file under the Freedom of Information Act (FOIA) and later passed the information on to the Congressional Leadership Fund (CLF), a leading super PAC that has ties to Republican House Speaker Paul Ryan. CLF then issued a press release using information from her security form as a political attack, and accused the candidate of "hiding" after he sent a letter to the Republican PAC threatening legal action against them.
She responded to the news Thursday saying she is "profoundly disappointed" by CLF's actions.
"When I served as a federal agent with the US Postal Inspection Service and as a case officer with the Central Intelligence Agency, I did so to serve my country and protect my fellow citizens – including those who work at the Congressional Leadership Fund (CLF) and America Rising," Spanberger said in a statement released by her campaign, "The Postal Service has confirmed that they gave information to America Rising and CLF that they never should have provided. I remain profoundly disappointed by CLF’s politically-motivated choice to circulate my unredacted National Security Questionnaire, a document that could not have been legally provided to them. Despite our repeated cease and desist letters, they continue to circulate my private information, including my Social Security number and medical history."
"I am continuing to review potential legal remedies against USPS, America Rising and CLF to get answers to unanswered questions and right this wrong," Spanberged added.
The episode also raised questions over why the Postal Service was involved in the handling of information of such a sensitive nature.
According to Partenheimer, the Postal Service was involved in this instance because of Spanberger's previous employment with the Postal Inspection Service, a job she held in 2002 while waiting for her security clearance to be approved, according to the Washington Post.
The CLF also responded to the news Thursday, doubling down on its attacks and accusing Spanberger of mounting a "misleading smear campaign."
"For the last 48 hours Abigail Spanberger and her liberal allies in Washington have engaged in a misleading smear campaign against our organization and now that the truth has come out she owes us an apology," CLF spokesperson Courtney Alexander said in a statement provided to ABC News. "This has been nothing but a dishonest effort to cover up the reality that she hasn’t been transparent about her work history and when confronted with the facts, Ms. Spanberger ran to the New York Times with a false attack."
In CLF's original release, titled "What Is Abigail Spanberger Hiding" and containing information from Spanberger's security file, the group sought to make an issue out of Spanberger's employment as a substitute teacher at the Islamic Saudi Academy, a school in Alexandria, Virginia, when she was in her early 20s.
Spanberger said she had "absolutely nothing" to hide.
Joe Pounder, the CEO of America Rising, also released a statement Thursday defending the group's actions.
"The fact remains that a simple FOIA request exposed aspects of Abigail Spanberger's resume she truly didn't want voters to know about and for which she must answer," Pounder wrote on Twitter.
The news also comes as a top Democrat is claiming that the Postal Service has wrongfully disclosed several unredacted security clearance applications and personnel files in recent weeks.
Rep. Elijah Cummings, D-Md., the top Democrat on the House Oversight Committee, said that the Postal Service briefed his staff on the subject. He said they did not disclose the other individuals affected besides Spanberger, the Democratic House candidate.
He called on his committee to demand that America Rising and the Congressional Leadership Fund – or any other groups that had the records — to return them to the appropriate authorities.
Spanberger served as a covert officer at the CIA for eight years, work that included gathering intelligence overseas on potential terrorists.
The controversy has taken on larger importance given the high-profile nature of the political battle unfolding within the district's borders. The race between Spanberger and GOP Rep. Dave Brat in the central Virginia congressional seat that Donald Trump won by just six points in the 2016 presidential election is expected to be highly competitive in November.
Brat, a former economics and ethics professor at Randolph-Macon College in Ashland, Virginia, was vaulted to national prominence in 2014 after he unseated then-Republican House Majority Leader Eric Cantor in the district's Republican primary.
Copyright © 2018, ABC Radio. All rights reserved.