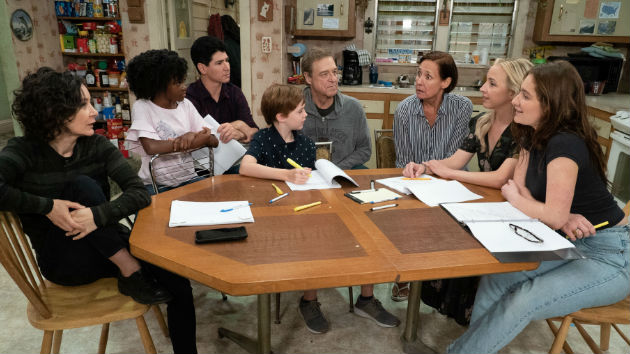 The photo is a candid one of the performers in the set's kitchen, practicing their lines during a table read of a script.

Obviously missing from the picture is Roseanne herself, who ABC fired after posting a racially charged tweet last spring, just as Roseanne launched to great ratings. She gave ABC permission to continue the show without her, and waived any financial compensation she would have received as the creator of its characters.

Goodman, her onscreen husband, recently revealed he was "heartbroken" by the situation, but insisted he "knows for a fact she's not a racist."

He also suggested that her character will be killed off, explaining her absence and leaving him a "mopey" widower.
With the cast now back at work in Burbank, California, The Conners is set to debut Tuesday, October 16 at 8 p.m. on ABC.

Kristen Bell opens up about “struggling” with her mental health, therapy with husband Dax Shepard
“I’d be up for that!” Liam Neeson wants to re-join the ‘Star Wars’ universe with Disney+’s ‘Obi-Wan Kenobi’ show
Joe Biden to shore up Affordable Care Act after Trump assault on health law
Coronavirus live updates: US could see up to 477,000 deaths by Feb. 6
‘The Conners’ Sara Gilbert on safely returning to set, “It’s been a lot of testing”
Up to 20,000 Guardsmen, many armed, will now help with inauguration security