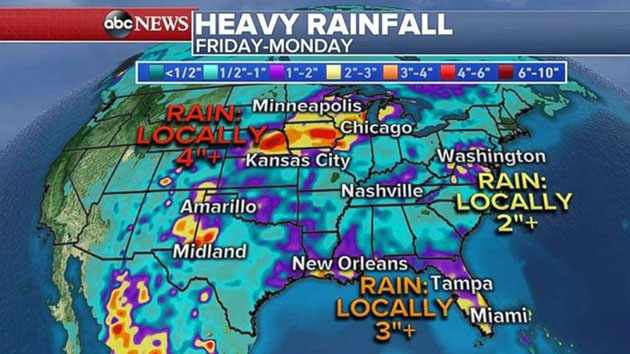 ABC News(NEW YORK) — Much of the country is expecting a wet Labor Day weekend, with severe storms in the Midwest and more flash flooding possible.
A large storm system is moving into the Plains and Great Lakes on Friday. The largest threats will be damaging winds, hail and potential tornadoes. This region already has endured flash flooding and almost two dozen tornadoes just this week.
Heavy rainfall is expected in already-saturated areas, including Minnesota and Wisconsin, where a flood watch has been issued. Some areas could see more than 4 inches.
A stationary front in the mid-Atlantic likely will produce heavy precipitation from Washington to Philadelphia over the weekend. By Monday, a tropical wave in the Caribbean could bring heavy rain to southern Florida.
Sept. 10 is the peak of hurricane activity in the Atlantic. A tropical wave near Africa is forecast to become Florence in the next 12 to 24 hours, but other than the Cabo Verde islands, no big threats are expected.
Copyright © 2018, ABC Radio. All rights reserved.