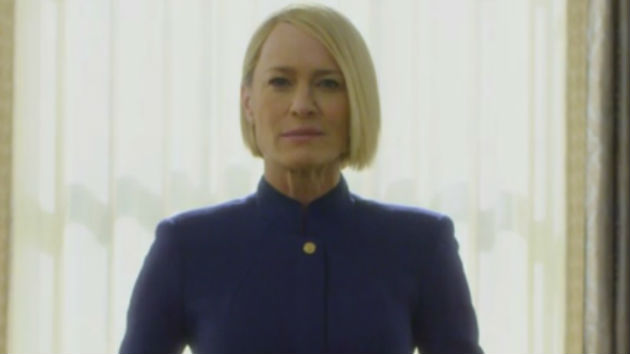 Netflix(LOS ANGELES) — Robin Wright inherits the Oval Office from her former co-star and onscreen husband Kevin Spacey when House of Cards returns for its final season November 2. But for now, Wright is speaking out about Spacey's fall from grace amid allegations of sexual misconduct, and his chances for redemption.

When asked by the fashion site Net-A-Porter if a career comeback was possible for Spacey, who was terminated from the show, Wright said, "I don't know how to comment on that, I really don't."

She then added, "I believe every human being has the ability to reform…In that sense, second chances, or whatever you are going to call it – absolutely, I believe in that. It’s called growth."

Wright also seemed to sympathize with Spacey's predicament, commenting, "I feel sorry for anybody whose life is in the public arena. It’s a nightmare, can you imagine? We do a job, we share…with viewers. Why does our private life have to be public? I hate that part of this industry."

Wright, whose former marriage to Sean Penn became tabloid fodder, added, "It’s so invasive. I believe everyone’s personal life should be personal. Positive, negative, neutral, whatever – I don’t believe it should be anybody’s business."

Wright clarified, "I’m not talking about [the #MeToo] movement — I’m talking about media. The exposure. It’s an awful feeling. A stranger deciding they know who you are…I mean, it’s criminal, it really is."