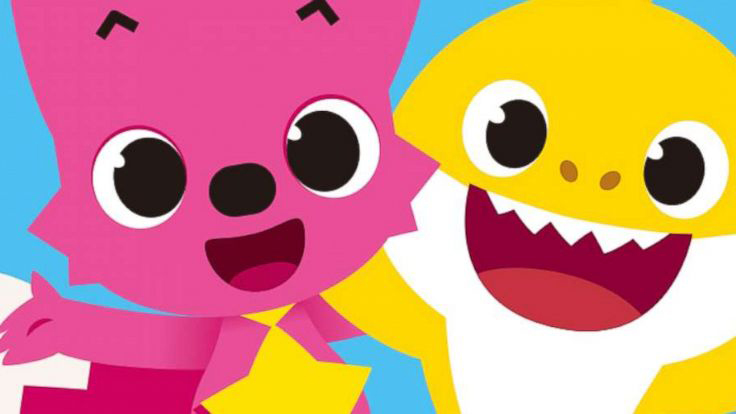 Pinkfong via Facebook
Posted on August 31, 2018 by ABC News

Pinkfong via Facebook(SEOUL) — An animated cartoon fox named Pinkfong is taking the children’s music industry by storm. The magenta-colored character first took-off with a viral song called “Baby Shark,” which recently surpassed 1.6 billion hits on YouTube, and topped the children’s music chart on iTunes.
“It is so catchy, it has such a hook, so addictive that it is literally crack for kids,” Teddy Zee, a Hollywood producer and media and tech consultant based in Los Angeles told ABC News. “It can go on repeat, [and it’s] so addictive that it even has parents and grandparents sharing in the experience.”
Pinkfong is featured in the kid’s section of Amazon’s mobile app store, and Pinkfong's English-language YouTube channel has 10 million subscribers just three years after it launched in 2015. Overall, Pinkfong has over 13 million YouTube subscribers around the globe, in languages that include Korean, Japanese, Spanish, Russian, Mandarin, Thai and English.
Compared to the YouTube channels of established brands like Sesame Street, which has 3.9 million subscribers, Pinkfong’s success over the past few years has been extraordinary.
The character and songs were created by a children’s education product development company in South Korea called SmartStudy. According to the company’s co-founder, Ryan Lee, Pinkfong began as a small project to come up with a “nursery rhyme for the new generation.” Lee was looking for a more upbeat and dynamic song that could appeal to different nationalities, something different from “traditional nursery songs which are usually slow and calm,” he says.
And even Lee is surprised by Pinkfong’s success.
Pinkfong’s character is inspired by the fox in the classic French book “The Little Prince,” by Antoine de Saint-Exupery.
“Overall [the] color palate of the animation is so bright and engaging that it is literally eye candy for young kids, then the secret sauce is the music,” says Zee.
To create Pinkfong’s catchy melody, SmartStudy took a traditional chant widely known in the U.S., incorporated a repetitive verse, then topped it with K-pop style music. The choreography team developed the “shark dance” which may seem complicated for a toddler, but which Lee says kids have picked up quickly thanks to a new generation accustomed to video.
The short length of the videos have made them appealing to people on mobile phones through YouTube and SmartStudy’s education mobile apps, says Zee.
“I like the Pinkfong songs when dad shows it to me,” says Lee Dam Woo, a 5-year-old shopping with his mother at a children’s bookstore in Seoul, South Korea.
Rahee Choi, also five, will automatically do the shark dance when she hears “Baby Shark,” says her mother at the Kyobo Bookstore in Seoul. She adds that her daughter will even change the lyrics by replacing them with the names of her own family members as she sings along.
Lee credits much of the song’s success to lyrics that include three generations of Baby Shark’s family.
“Kids love the baby shark song for its easy and repetitive rhythm,” says Lee Sung-bok, chairman of Korea Children’s Music Composer Association.
There are now more than 100 variations of “Baby Shark” in 11 different languages, according to SmartStudy.
Fans have created their own way of interacting with Pinkfong through something called the “Baby Shark Challenge.” People, regardless of age, shoot videos of themselves singing and dancing along to “Baby Shark,” and post the videos on social media.
“My friend and I sing it ["Baby Shark"] to each other when we’re in bad moods at work,” said Tiffany Ward, who works at a fast-food restaurant in West Virginia. She uploaded a video of herself dancing to the baby shark rhythm on Instagram. “I thought it [the Baby Shark Challenge] was super funny and sweet.”
SmartStudy is working hard to cash in on Pinkfong’s success by creating new characters, and expanding their content to cater to children over the age of seven. They are also planning to bring the “Pinkfong and Shark Family” musical to Malaysia and Singapore after it was a hit in South Korea.
Experts say that Pinkfong’s greatest challenge lies ahead. Will it have enough staying-power in the children’s entertainment market to stand alongside brands like Disney and Sesame Street?
“The skillset is different going from short content that lasts three to five minutes at tops into a scripted longer-form, 22-minute format, which is the domain of traditional media companies in Hollywood,” says Zee.