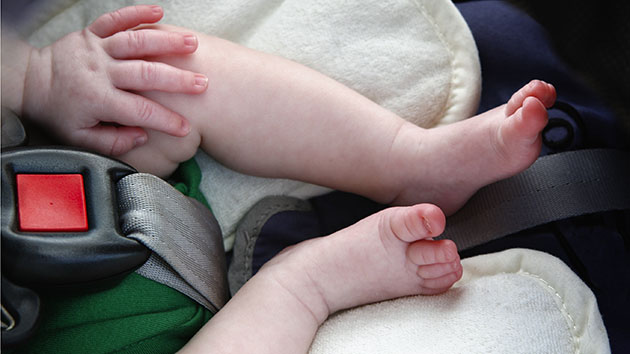 iStock/Thinkstock(NEW YORK) — Children should stay in rear-facing car seats as long as possible to protect their developing heads, necks and spines in the event of a crash, according to new guidelines from the American Academy of Pediatrics (AAP).
Parents are now advised to keep their children's car seats in the rear-facing position for as long as possible, or at least up to the age of 4, according to the AAP's recently updated recommendations. Previously, the AAP recommended rear-facing car seats up until the age of 2.
The AAP's new guidelines are encouraging parents to keep kids rear-facing until they have reached the maximum height and weight limit listed on their car seat's labels and instruction manual. Then parents can transition kids to the next phase of car seat or booster seat.
Motor vehicle crashes are the leading cause of death for children over the age of 4, according to the AAP. Placing a child in a car seat correctly can help decrease the risk of death or serious injury by over 70 percent, according to nonprofit child safety organization Safe Kids Worldwide.
"Every month that a child rides rear-facing a little bit longer gives more time for the head, neck and spine to develop," Kerry Chausmer, director of certification at Safe Kids, told Good Morning America. "And that's really why we want kids to ride rear-facing. It protects the head, neck and spine better in a crash."
Dr. Benjamin Hoffman, lead author of the AAP policy statement and chair of the AAP council on injury, violence and poison prevention, said car-seat manufacturers now produce seats that allow children to remain rear-facing until they weigh 40 pounds or more, "which means most children can remain rear-facing past their second birthday."
"It’s best to keep your child rear-facing as long as possible. This is still the safest way for children to ride," Hoffman added in the statement released by the AAP.
Experts also say it's not a problem if older children's legs can touch the back seat while using rear-facing car seats.
"Kids are actually safer rear-facing — not just their head, neck and spine, but also their legs. So it's perfectly fine if kids' legs hit the back of the car seat," Chausmer said.
Copyright © 2018, ABC Radio. All rights reserved.

Dads form ‘Dad’s on Duty’ squad to help stop violence at their kids’ high school
FDA panel greenlights COVID-19 vaccines for kids ages 5 to 11: Five things to know
FDA panel greenlights vaccines for kids, paving the way for authorization
Water levels jump back up in West after long drought
Angelina Jolie is thrilled her kids are raiding her closet
FDA panel meets on COVID-19 vaccine shots for kids under 12: Five things to know