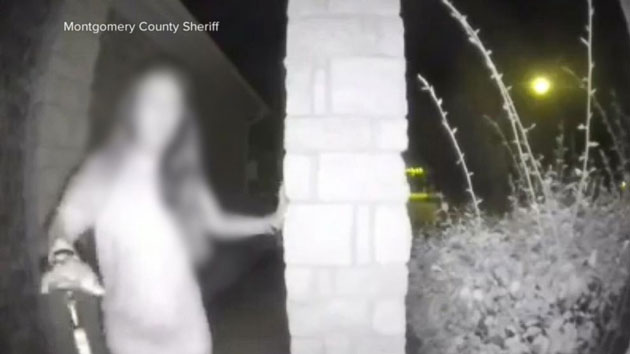 Montgomery County Sheriffs Office(DALLAS) — The brother of the boyfriend of a mystery Texas woman who sparked a nationwide hunt after she was filmed ringing doorbells for help insisted the woman was in no way a captive and disputed her claim that she was sexually assaulted, he told ABC News in an exclusive interview.
"It was just kinky sex, and that was the extent of it," said Jeff Collins, the only brother of Dennis Ray Collins, who was accused of sexually assaulting the woman before killing himself. "It wasn't like what people are saying — she was never a captive or being kept in his house against her will.
"My brother was no monster," he added.
The woman was recorded by a surveillance camera last week as she went from house to house in the dead of night, clad only in a T-shirt and with what appeared to be broken restraints on her wrists. The five-day search for her ended when authorities found Dennis Ray Collins, 49, lying dead of a self-inflicted gunshot wound in his house in the same neighborhood.
The woman, whose identity was not released because she was allegedly a domestic violence victim, was found safe and with family in Dallas, authorities said. She told police she had been sexually assaulted and that the broken restraints on her wrist were bondage cuffs, commonly used in "private intimate encounters," police said.
She had managed to break free from the cuffs and go and seek help from neighbors, authorities said.
Jeff Collins, who said he spoke to his brother often, said Dennis Collins had mentioned his girlfriend in glowing terms. She had attended a birthday party of Dennis' 13-year-old daughter and had lived with him at the house for four months, Jeff Collins told ABC News.
Dennis Collins had been depressed for a while about losing several people close to him, his brother said. In his suicide note, a copy of which Jeff Collins said he has in his possession, Jeff says his brother took responsibility for disrupting the lives of his family and his girlfriend, particularly after the surveillance video gained nationwide attention.
"He killed himself not out of guilt, but because he couldn't stand his daughter thinking of him that way and because he had been unhappy for a long time," Jeff Collins. "My brother's come out looking like a monster in all this but he wasn't. He was a good man. They were both good people."
Dennis Collins had pleaded guilty to sexually abusing another woman in 2000 in an unrelated case, according to Harris County court documents.
In last week's case, police said when the neighbors did not answer their door in the wee hours of August 24, the woman returned to Collins' house and left for Dallas shortly thereafter. Police said the mother of Collins’ daughter contacted them Wednesday morning and said Collins had sent her text messages that made her worry that he may hurt himself.
When police broke in, they found Dennis Collins' body and discovered a suicide note, police said.
Lieutenant Scott Spencer of the Montgomery County Sheriff's Office said their investigation would look into sexual assault, kidnapping and unlawful restraint.