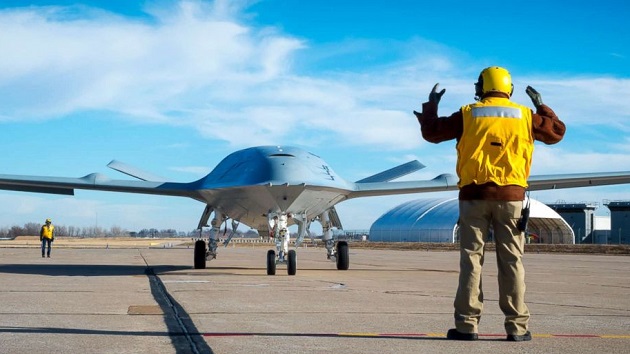 Boeing(WASHINGTON) — The U.S. Navy has awarded Boeing an $805 million contract for four new MQ-25A "Stingray" unmanned mid-air refueling tankers that will be based on aircraft carriers.
The contract could balloon to $13 billion if the Navy gets the full requirement of 72 Stingrays for its carrier fleet.
The sleek drone resembles a flying wing and is intended to replace existing F/A-18 Super Hornets that can refuel other carrier-based F/A-18 fighters while in flight. The Navy plans to place four of the drones on each carrier in an effort double the ranges of deployed F/A-18's.
The unmanned aircraft will still require pilots at the controls who will pilot the aircraft remotely after it is launched by catapult off a carrier deck.
"MQ-25A is a hallmark acquisition program," said Assistant Secretary of the Navy for Research, Development, and Acquisition James F. Geurts. "This program is a great example of how the acquisition and requirements communities work hand in hand to rapidly deliver capabilities to our Sailors and Marines in the fleet."
Boeing was awarded an $805 million contract "for the design, development, fabrication, test, delivery, and support of four MQ-25A unmanned air vehicles, including integration into the carrier air wing for an initial operational capability by 2024," according to a Navy statement.
"This is an historic day," said Chief of Naval Operations Adm. John Richardson. "We will look back on this day and recognize that this event represents a dramatic shift in the way we define warfighting requirements, work with industry, integrate unmanned and manned aircraft, and improve the lethality of the air wing – all at relevant speed."
Placing four of the aircraft on each aircraft will provide the Navy with a more efficient refueling capability than exists now. It will free up the Super Hornets currently tasked with mid-air refueling to carry out additional operational missions and the new drones will be able to operate carry out longer flights to enable refuelings further away from a carrier.
In the air operations over Iraq, Syria and Afghanistan, Navy aircraft have carried out long duration missions thanks to U.S. Air Force mid-air refueling tankers that constantly fly over those areas.
The new capability will also enable carrier-based aircraft to fly in areas where Air Force refueling tankers may not be available.
It will also be expensive. The Navy says it wants 72 of the refueling drones for its carrier fleet, that could cost more than $13 billion, if research and development costs are included.