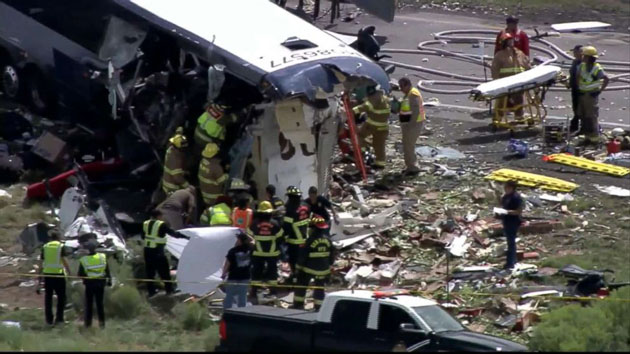 KRQE(THOREAU, N.M.) — At least four people have been killed and others are seriously injured after a Greyhound bus crashed into a tractor trailer on a highway in New Mexico Thursday afternoon, police said.
The number of dead is expected to rise, officials said.
At least 42 people were transported to nearby hospitals, with another six being treated at the scene, authorities said.
"There are multiple serious injuries and passengers transported. Officers and EMS are actively working and assessing the scene, New Mexico State Police said.
More than 33 patients have been transported to local area hospitals with injuries, some are said to be in critical condition, officials said.
The NTSB is launching a go-team to investigate the crash, the agency told ABC News.
Christopher Jones said he got to the accident site just after the crash.
"I saw the tractor trailer flipped upside down the driver of the tractor trailer was on the shoulder just sitting there. So I grabbed my medical kit and grabbed a bunch of my gloves and got out there and just started helping people and it was a pretty rough site," Jones told ABC News.
The driver of the tractor trailer told jones that his front tire popped off the vehicle, causing it to veer into oncoming traffic where it struck the bus.
"I was talking to the driver of the tractor trailer and when I flagged what happened and talked to the driver, he said his front drive tire popped on him and so it took him into the medium onto oncoming traffic right into the Greyhound upon impact, which I’m not too sure of the details. But I am guessing it was a head on collision," Jones said.
Jones, who said he used to be a volunteer firefighter and EMT, described the scene as "one of the hardest" he's ever had to see.
There were 49 passengers aboard Greyhound bus #1333, according to a statement from Greyhound. The bus was headed from Albuquerque to Phoenix.
"The total number of injuries has not been determined at this time. The cause of the incident has not yet been determined. We are fully cooperating with local authorities and will also complete an investigation of our own. Please contact the New Mexico State Police Department for any further details," Greyhound said.
This is a breaking story, please check back for updates