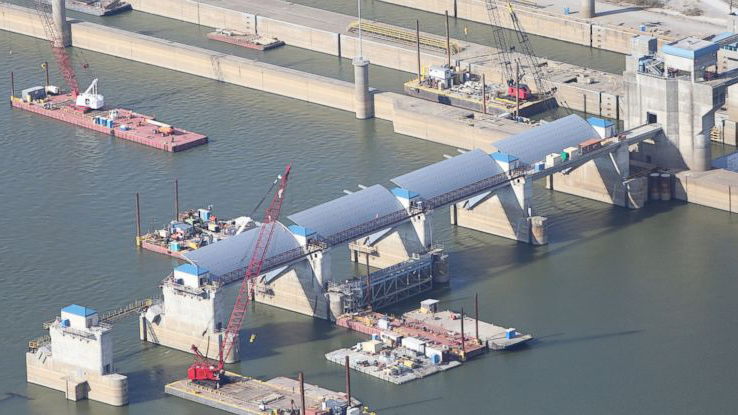 Louisville U.S. Army Corps of Engineers(OLMSTED, Ill.) — On the banks of the Ohio River in southern Illinois, construction has been underway since the Reagan administration to complete one of the largest civil works projects in U.S. history.
The Olmsted Locks and Dam, a $3 billion project that began three decades ago and took more than 45 million labor hours to complete, is set to open after a ribbon-cutting ceremony in Olmsted, Ill., attended by congressional and Army leadership on Thursday.
They are the final two locks in a system of well over a dozen along the Ohio River reaching 980 miles from Pittsburgh down to Cairo, Ill., that assist vessels in transiting a sea level change of about 460 feet.
A lock is a device used to raise or lower watercraft traveling between stretches of water of different depths on a river or canal, making the waterway more easily navigable.
The two 110-foot by 1,200-foot locks and a roughly 2,500-foot long dam lie at the confluence of the Ohio, Tennessee, Cumberland and Mississippi rivers, an area described as the hub of the American inland waterways.
More tonnage transits through this point on the Ohio River than any other place in America's inland navigation system, the rough equivalent of 25,000 semi-trucks passing through annually. In recent years, approximately 90 million tons of commodities have passed through the two locks and dams that Olmsted replaces — items like coal, grain, rock and sand, according to the U.S. Army Corps of Engineers (USACE) which has spearheaded the project.
"We're celebrating that now, as then, we are a great nation that can undertake great works and write new chapters of our history together," said Senate Majority Leader Mitch McConnell (R-Kentucky), who was serving his first term in Congress when Olmsted Locks and Dam was first authorized with the passage of the Water Resources Development Act of 1988 — which allocated $775 million for the project.
Since then, the approximately $3 billion cost of Olmsted has been shared by taxpayers and the navigation industry. A tax on diesel fuel paid by the industry goes into a trust fund which has provided 50 percent of the cost of the project, USACE officials said.
In 2014, Congress passed a water resources bill, signed by President Obama, that included additional funds to complete the over-budget project that began decades earlier.
At the time, Senator Rand Paul (R-Kentucky) called the project "extraordinarily expensive" and "a boondoggle," but acknowledged "we can’t stop because we need the dam.”
Senator Dick Durbin (D-Illinois), who attended Thursday's ceremony with McConnell, said the project was "one of the nation's most expensive" projects, but one that represents "money well spent" for America's taxpayers.
Durbin said the new locks and dam will pay for itself in just five years.
The project will solve what has been a major bottleneck for the nation's shipping industry at a critical part of the Ohio River. The "antiquated design and age" of the previous locks and dams, called No. 52 and No. 53, made it "impossible to meet current traffic demands without significant delays," according to USACE.
Delays in transiting through No. 52 and No. 53 had reportedly reached more than 15 hours, if not days or weeks if there were issues with the locks.
"Lock times on the new system will be reduced from five hours to one hour," Durbin said on Thursday.
Faster shipping times mean that the project will provide an estimated $650 million a year in economic benefits to the nation, according to Waterways Council president Mike Toohey.
No. 52 and No. 53, which will be demolished once Olmsted is operating successfully, were originally completed in 1929, with updates added in the 1960s and 1970s.
Lt. Gen. Todd Semonite, the commanding general of the U.S. Army Corps of Engineers, said that those two locks and dams outlived their projected lifespans by decades. But he urged America to continue investing in modernization of its aging infrastructure system, telling the audience that throughout USACE's civil works portfolio there is a backlog of 1,000 projects totaling $96 billion in need of revitalization.
Though the first lock and dam built by USACE on the Ohio River was in 1885, the complete set of locks and dams for the river was not completed until 1929 at a cost of $125 million. By the late 1950s, as diesel-powered towboats replaced steamboats, it became necessary to replace the older design with modern high-lift locks and dams that could accommodate those vessels.
"It is important to note that these 'modern' locks and dams are aging," USACE officials said in online document about the Olmsted project. "As these projects age, necessary repairs become more frequent and more extensive and therefore, more costly."
Olmsted Locks and Dam is scheduled to become operational in October 2018.