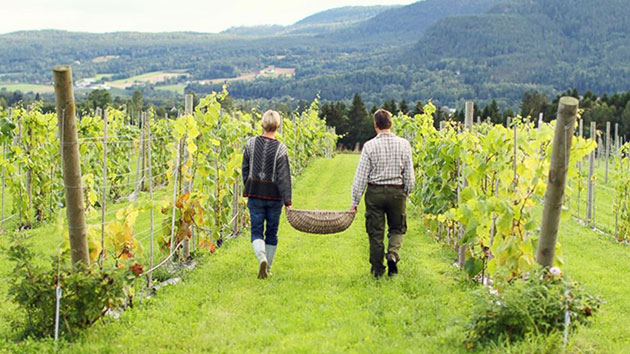 Lerkekasa Vineyard(GVARV, Norway) — What is thought to be the world's most northerly commercial vineyard is up for sale in Norway.
The 15 acres of fertile vineyard, which is used to produce award-winning wines, also comes with a national cuisine restaurant, several cottages and three gigantic wine barrels nestled among the vines that serve as overnight accommodations. The property could be yours for as little as $805,000.
Joar Saettem, and his wife, Wenche Hvattum, told ABC News they had developed Lerkekasa Vineyard over the last decade.
"We both wanted a property where we could live and work and spend a lifetime," Hvattum said. "We wanted to create a life and a lifestyle."
Lerkekasa Vineyard sits at a latitude of 59 degrees north, similar to Alaska. But it is a two-hour drive southwest of Oslo.
The vineyard is located in the fruit-growing region of Gvarv, in a valley near Lake Norsjo, protected by hills and mountains that create a microclimate that's one of the warmest places in Norway, according to Saettem.
"We produce about 1,500 liters of red, rosé, white and fruit wine a year," Hvattum said.
For decades, Saettem, a geologist, wanted to be a winemaker. He and his wife even studied courses of winemaking and viticulture.
Grapes were first planted in 2008. Saettem has experimented with 20 varieties to find those that best suit the climate.
"In 2009, we had our first vintage. It was such a memorable year for us," Hvattum said.
From 20 varieties, only Hasansky Sladki from Russia, Solaris from Germany and Rondo from France appeared to grow well in the harsh local conditions, although getting fruit to ripen will always be an issue, even with global warming.
"When I started this project, I knew that climate change would bring higher temperatures," Saettem said. "Climate change is a serious threat, but we wanted to demonstrate that because of it, it is now possible to grow and make wine in northern regions."
Experts from the Paris-based International Organization of Vine and Wine (OIV) seem to agree with Saettem.
Alejandro Fuentes Espinosa, OIV’s head of viticulture, told ABC News that the map of the wine world is undergoing a dramatic change.
"As global average temperatures rise," he said, "the best lands to plant a vineyard are moving away from the equator, and into the Northern Hemisphere and down into the Southern Hemisphere."
Bob Van Oort, a senior researcher with Center for International Climate Research, told ABC News, "Average warmer temperatures and new, innovative, cold-resistant vines are helping push wine production in Norway, a rare positive spin-off from climate change."
Erik Lidas, a wine expert and head of Norwegian grape growers who awarded Lerkekasa's Nordic Night rose, lists Lerkekasa as the world's most northerly commercial outdoor vineyard.
"There are some other producers that have vines a little further north, but do not have vintage yet or have vines in greenhouses to shield them from the cold," Lidas told ABC News in a telephone interview.
"This vineyard project was a dream come true," said Hvattum, who, like her husband, is 62. "But both of us are aging and we no longer can do this by ourselves. Unfortunately, none of our six children are interested, as they all have urban jobs."
Saettem said he is hoping to find a buyer who would continue his dream of a working vineyard.
"We hope there are more crazy people like us out there to move the boundaries," Saettem said.
"To a new set of adventurers," Hvattum.
Copyright © 2018, ABC Radio. All rights reserved.

Woman who made Bernie Sanders’ viral inauguration mittens says they’re not for sale
Chrissy Teigen says sobriety is “a different world for me”
What movie theaters may look like in a post-COVID world
Elon Musk is now the richest person in the world
Howard Nursery seedling sale to return in 2021
Threats sparked by disinformation could spark real world violence in Georgia, activists say