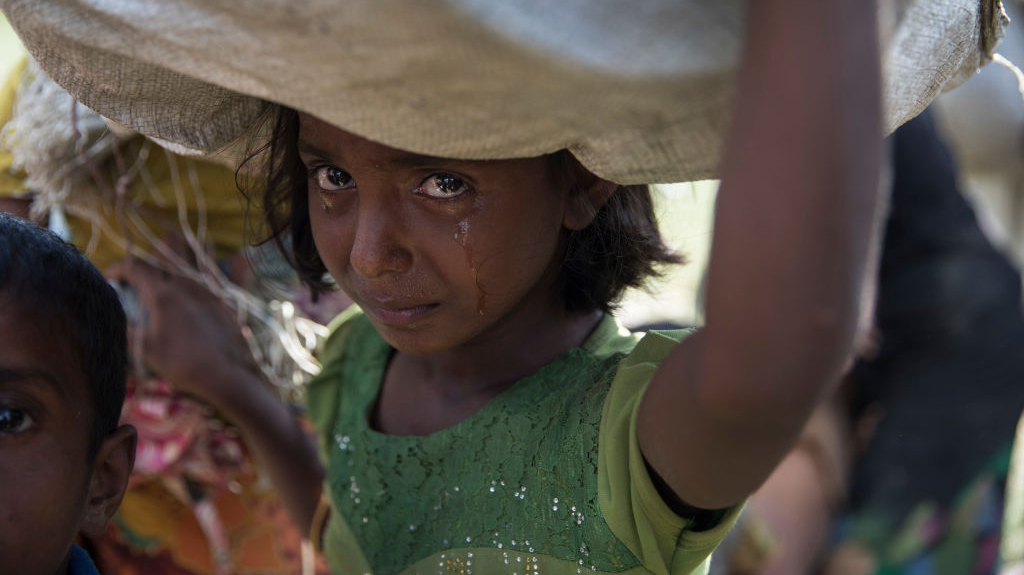 Paula Bronstein/Getty Images(WASHINGTON) — Three days after the United Nations released its report saying Myanmar's military had "genocidal intent" in its massacre last year of the Rohingya, the U.S. is still weighing whether to use the same term to characterize the slaughter that drove over 700,000 refugees from their homes and across the border into Bangladesh.
It's an important designation that has sparked an internal battle in the Trump administration about how to proceed and what obligations it would create for the U.S.
The U.N. report released Monday laid out in stark, horrific detail how Myanmar's military carried out atrocities against the Muslim-majority ethnic group, the Rohingya, executing villagers in mass killings, raping women and girls, burning entire villages to the ground, and detaining and torturing survivors. The report concluded that senior military officials should be prosecuted for genocide and other war crimes.
One day later, U.S. Ambassador to the United Nations Nikki Haley said that the State Department's own fact-finding report was "consistent" with the U.N. report and that the attacks on Rohingya were "planned, premeditated, and coordinated" by the military. Myanmar has denied any wrongdoing, saying it is conducting a legitimate operation.
"We are now all armed with the devastating eye-witness accounts of the Rohingya," Haley said Tuesday. "The whole world is watching what we do next and if we act."
While Haley did not use the term "genocide," to human rights activists, her statements seemed to signal that a genocide designation was coming. But the State Department is still pumping the brakes.
When asked about Haley's comments, a senior State Department official said, "I'm not a lawyer, you're not a lawyer. As far as I know, Ambassador Haley is not a lawyer."
"We've not made any kind of a determination yet," the official added.
Haley was citing the agency's own report on the atrocities, compiled after teams of U.S. human rights investigators interviewed 1,024 Rohingya refugees, randomly selected in Cox's Bazaar, Bangladesh — where nearly one million Rohingya refugees now live.
That report is still with Secretary of State Mike Pompeo, who is reviewing it and deciding whether and when to make details of it public. Ahead of the one-year anniversary of the start of the Rohingya crisis — when Rohingya militants attacked a series of police outposts and the Myanmar military initiated its brutal campaign against Rohingya villages — Pompeo was reportedly planning a speech to release the report, Politico reported earlier this month.
Pompeo was prepared to say the military's actions showed "premeditation and coordination," but included the phrase "hold for designation" on genocide, as one had not yet been made, Politico reported. But since those excerpts were leaked, there has been no announcement on when that speech or the report's publication might come, if at all.
State Department officials have repeatedly said they have no details to provide on that. But the leak did prompt a warning from State Department spokesperson Heather Nauert, who said she and Pompeo were disappointed and warned the leaks limit "our ability to have internal conversations. It can also hurt people who are in the field."
While the report is being reviewed, Nauert cautioned Tuesday against a rush to use the term "genocide."
"To the average person, of course these things are incredibly horrific, and it seems like we should just slap a label on something," Nauert said. "Well, they're complex, legal designations that have legal meaning and weight in courts around the world."
But Haley shared many details from the unreleased U.S. report with the U.N. Security Council, saying it found the majority of the refugees directly experienced violence to their homes or families perpetrated by Burmese military and security forces. In particular, Haley said 82 percent saw a killing or their homes or village destroyed. Sixty-five percent witnessed an abduction, arrest, or detention, and 64 percent saw a family member or fellow villager injured.
More than 50 percent witnessed sexual violence, including 45 percent witnessing a rape. One-fifth reported witnessing more than 100 victims killed or injured in a single event.
While a "genocide" designation requires that complex legal analysis, there is debate about whether it carries legal obligations that some cite as a reason for careful deliberation. As a signatory to the Genocide Convention in 1948, the U.S. agreed genocide is "a crime under international law which they undertake to prevent and to punish." But it's unclear what responsibility signatories have for genocides that take place in another country.
As the Obama administration was weighing whether to declare ISIS's actions against Iraqi minorities a genocide in March 2016, it indicated it did not carry special obligations: "Acknowledging the genocide or crimes against humanity have taken place would not necessarily result in a particular legal obligation for the United States," State Department deputy spokesperson Mark Toner said at the time.
Then-Secretary John Kerry eventually did find ISIS was responsible for genocide against Yazidis, Christians, and Shia Muslims. But his spokesperson John Kirby told reporters the next day that the administration hoped to "galvanize the international community" and would leave it to the "many national and international vehicles that could be applied with respect to accountability."
The senior State Department official would not put a timeline on Pompeo's review for a designation, saying, "There's no requirement that we make a determination by any date, so we'll just make sure we get to the right spot."