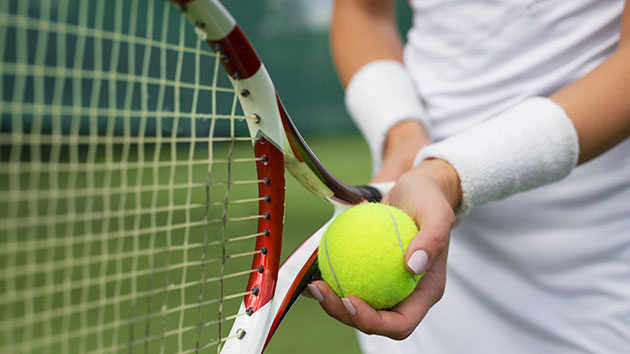 iStock/Thinkstock(NEW YORK) — Just days after Billy Jean King criticized the French Open's tournament chief of "policing women's bodies" for saying Serena Williams' catsuit "would no longer be accepted," the U.S. Open came under fire after a female player was penalized for briefly removing her top on the court.
Once again, King, whose name graces the facility where the grand slam tournament is held annually in Queens, New York, was among the chorus of voices demanding change.
"This rule is outdated and impractical," she wrote on Twitter.
Less than an hour later, the U.S. Open released a statement reversing its policy one day after the controversial call against French player Alize Cornet.
"We regret that a code violation was assessed to Ms. Cornet yesterday," the statement said. "We have clarified the policy to ensure this will not happen moving forward. Fortunately, she was only assessed a warning with no further penalty or fine."
According to the statement, all players will be allowed to change their shirts while sitting in the player chair.
The statement added, "Female players, if they choose, may also change their shirts in a more private location close to the court, when available. They will not be assessed a bathroom break in this circumstance."
"The more these incidents come out, that's a good thing," Asha Dahya, founder and editor of GirlTalkHQ, told ABC News. "That's going to lead to culture change more than policy ever will."
Dahya said both incidents point to a bigger systemic problem with the way that women's bodies are policed.
"Women's bodies seem to be a commodity in public spaces," she said. "Women's bodies are regulated through policies, and their bodies are dissected by the media."
Dahya said incidents like these play a part in the #MeToo conversation over assault, harassment and gender disparity.
"It's about who is in the position to take advantage of others," she said. "In the sporting arena, it's who is around, who is making these rules. It's men, not women."
The controversy started last week when French Open President Bernard Giudicelli said Williams and other players would have to dress more conservatively in future tournaments. According to The Independent, a U.K. newspaper, he singled out Williams in an interview with Tennis magazine, saying, "I believe we have sometimes gone too far. Serena's outfit this year, for example, would no longer be accepted. You have to respect the game and the place."
His remarks went viral, with some of Williams' fans calling them misogynistic and even racist. King was among those responding on Twitter.
"The policing of women's bodies must end," the tennis great tweeted. "The 'respect' that's needed is for the exceptional talent @serenawilliams brings to the game. Criticizing what she wears to work is where the true disrespect lies."
Williams, who said the fitted suit was designed to protect her against blood clots, laughed off the entire ordeal at a press conference at the U.S. Open days later.
"Everything's fine, guys," she said. "When it comes to fashion, you don't want to be a repeat offender."
To her point, Williams showed up for her opening match in Queens wearing a custom-designed tutu by Louis Vuitton designer Virgil Abloh and Nike. She paired it with NikeCourt Flare trainers and fishnet compression tights.
Twitter went wild.
A day later, as Cornet returned to the court following a 10-minute break from the 100-degree heat, she seemed to realize that her shirt was on backwards. She quickly pulled up her pink striped top and turned away from the court cameras as she took it off, showing her black-and-red sports bra underneath. Within seconds, Cornet put her shirt back on.
The chair umpire overseeing the match immediately hit her with a code violation. The Women's Tennis Association rulebook states that female players are only permitted to remove or change their clothing while they are off the court at the closest, most-private location. There is no such rule for male players.
The incident drew immediate criticism on Twitter.
"Alize Cornet came back to court after 10 minute heat break. Had her fresh shirt on back to front. Changed at back of court. Got a code violation. Unsportsmanlike conduct….. But the men can change shirts on court," tweeted Scottish tennis coach Judy Murray, who is the mother of professional tennis player Andy Murray.
Other Twitter users didn't mince words and called the ruling "sexist."
"The most important thing we've seen is the backlash," said Jane McManus, a longtime sportswriter for ESPN and other outlets.
McManus recalled the 1999 Women's World Cup final when Brandi Chastain ripped off her shirt and slid on the grass in her shorts and sports bra after scoring the winning penalty kick for the U.S. women's team.
"She wore far more than most women on the beach, but some said it distracted from the victory," McManus said. "It ended up being such a huge moment for women in sports. It also became part of a conversation about whether it was appropriate."
Twenty years later, McManus said, the conversation has evolved from how women look and what they are wearing to "what is the most functional thing for women athletes to be wearing."
"I think overwhelmingly you're seeing that women who are sports fans want that agency to be returned to women athletes," McManus said.
Copyright © 2018, ABC Radio. All rights reserved.