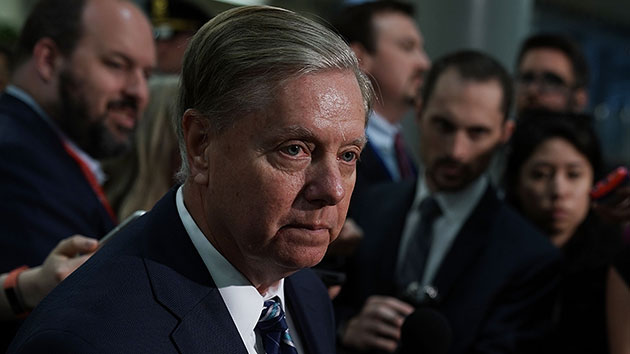 Alex Wong/Getty Images(WASHINGTON) — Sen. Lindsey Graham told CBS that it “pisses me off to no end” when President Donald Trump would say critical, sometimes personally insulting, things about the late Sen. John McCain, who died Saturday.
In comments that aired Thursday morning, Graham was asked about the disconnect between his closeness with McCain and his efforts to work with the president.
“I am going to do everything I can to help President Trump, and when he's wrong, I will say so," he said, adding, "It bothers me greatly when the president says things about John McCain. It pisses me off to no end, and I let the president know it."
Graham said he did not call Trump about lowering the White House flag back to half-staff, but he did “call some people around him.”
Earlier this week, after delivering an emotional tribute to his friend on the Senate floor, Graham told reporters that the late Arizona senator offered him some advice on how to handle the president.
"He said, 'Help him where you can. Just don't get sucked into all his bulls–t,'" Graham said, of his conversation with McCain.
Graham also told reporters that it was "challenging" being close to both Trump and McCain due to their bitter feud.
The South Carolina Republican, himself a lawyer, was also asked in Thursday's interview about the possible replacement for departing White House counsel Don McGahn.
“If I were the president, I'd pick somebody that understood the legislative branch. Because if the Democrats take over the House, then he's going to be subpoenaed to death and investigated to death,” Graham said.
On the topic of the special counsel investigation into Russia, Graham said he wasn’t convinced Trump has the ability to collude with any foreign government.
“I say this as a joke, but it's kind of a half of a joke. To collude, you gotta sit down, come up with a plan and stick with it. Trump's not good at that,” Graham said.
Copyright © 2018, ABC Radio. All rights reserved.