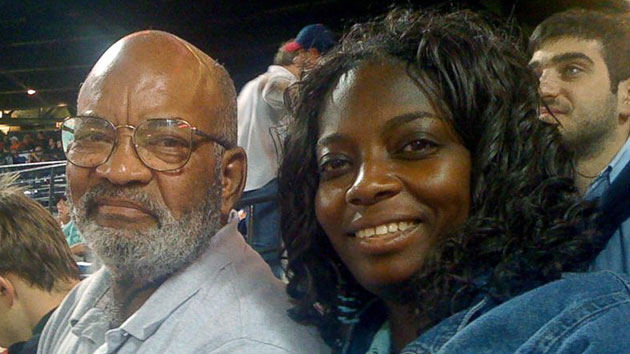 Courtesy Dawn Muhammad (NEW YORK) — After being told she was too overweight to donate a lifesaving kidney to her father, a Georgia woman lost more than 55 pounds in order to save the life of her "superhero" dad.
"He is my superhero. He is the man I have looked up to all my life," Dawn Muhammad of Atlanta told Good Morning America of her father, Lucious Daniels.
"He has sacrificed a lot for our family — a lot," she added.
In 2016, Daniels was diagnosed with stage 4 kidney failure at the age of 71. Doctors told Daniels that, without a kidney transplant, he had little chance of survival.
"They told me that I would be on a waitlist waiting for a kidney to become available," Daniels told GMA. "It would be pretty far down on the list, and at my age, I would be running out of time."
Muhammad said right away she knew that she had to do everything she could to help save the man who gave her life, and she headed straight to the hospital, where doctors told her that her body mass index (BMI) was too high to be a kidney donor.
After hearing the news, Muhammad said she "cried."
"I looked at myself in the mirror and I said, 'Let's try this, let's try this, let’s really try and commit to it,'" Muhammad said. "We told my father, 'This isn’t the end, this can’t be the end, we have got to find a moment to help.'"
Muhammad then embarked on the personal journey of losing 55 pounds in order to be able to give her father her kidney — all without telling him about the plan.
To lose the weight, Muhammad said she gave up sugar.
"Sugar is the devil," she said, adding that she "started cutting down the carbs and I started working out really hard."
Muhammad said she broke down in tears when she finally reached her goal, and broke the news to her father.
Muhammad was the perfect match, and to share her excitement about being able to save her father’s life, she wrote him a poem, which she presented to him in a card.
"Always and forever, that is how long I will love you, to my daddy, my first superhero, my first love," Muhammad said, reading from the surprise poem she presented him. "Now it's time for me to make the ultimate sacrifice for you, how could I work hard to lose weight and prove my health and not come through."
She continued: "From my kidney to yours, I love you, Daddy!"

Daniels said he couldn't be more proud of his daughter for giving him this gift.
“I knew that being on the waiting list for a long period of time was not going to make it happen,” he said. “So I was very, very happy that she came along and decided to do it for me, for her dad."
Muhammad said she has a message for other potential organ donors.
"Just do it," she said. "It's a selfless act. It's an act of love, not an act of sacrifice."
Copyright © 2018, ABC Radio. All rights reserved.