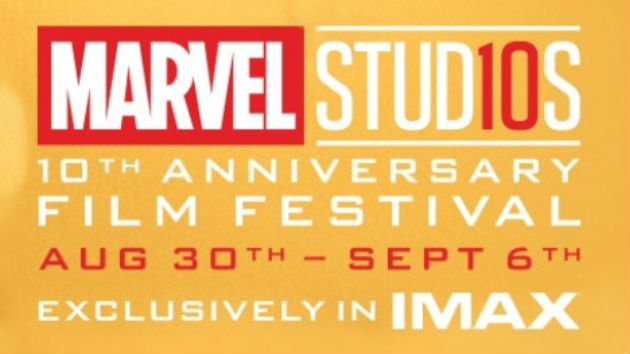 IMAX/Marvel Studios(NEW YORK) — Starting today, Marvel Studios is releasing all 20 of its blockbuster superhero movies in the ginormous IMAX format — part of what it's calling the "Marvel Studios 10th Anniversary Film Festival."

The Disney-owned hit factory kicks things off today with the movie that started all — 2008's Iron Man — which is being shown for the first time in IMAX. Also debuting today on IMAX is 2008's The Incredible Hulk, which featured Edward Norton as Bruce Banner/Hulk. He was eventually was replaced by Mark Ruffalo for 2012's The Avengers. 2010's Iron Man 2 and 2011's Thor will also debut in IMAX theaters today.

Along with the announcement came a flashy video showing the MCU's stars and directors touting seeing these larger-than-life movies in the larger-than-usual format.

"When the cameras start rolling, we just start thinking of one thing…delivering on the audience experience. And that's what IMAX does," Marvel Studios president Kevin Feige says.

Here is the full schedule; check with your local IMAX theaters for times:

Two screenings on September 6 will be chosen by a fan vote.