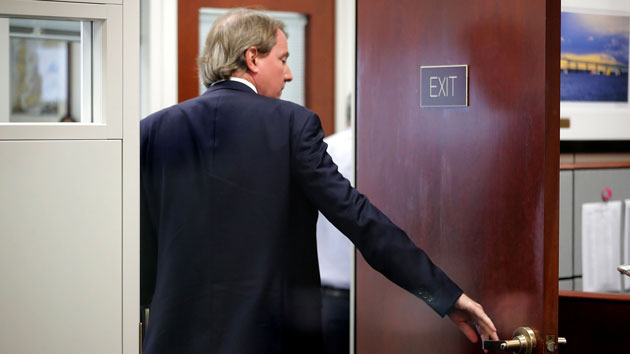 Chip Somodevilla/Getty Images(WASHINGTON) — Don McGahn, the White House counsel, will be leaving his position in the fall, President Trump announced in a tweet Wednesday morning.
Trump said McGahn's departure would come after the confirmation hearing of Supreme Court nominee Brett Kavanaugh.
McGahn had openly expressed his frustrations regarding his frayed relationship with the president and had signaled his desire to leave the White House months ago. McGahn had decided to stay on to lead the confirmation process of Kavanaugh, according to sources.
McGahn has cooperated extensively with special counsel Robert Mueller’s probe into Russia's meddling with the 2016 presidential election, meeting with Mueller's team of investigators at least three times, according to news reports. Sources familiar with his cooperation told ABC News that McGahn has been questioned by the special counsel’s team more extensively than any other member of the White House staff.
White House officials, including the president himself, have insisted they are not concerned over the testimony McGahn gave — testimony that could bolster claims the president sought to obstruct justice.
Trump first announced McGahn's appointment as White House counsel in November 2016, describing him as having "a brilliant legal mind, excellent character and a deep understanding of constitutional law."
He has since been a key player behind the scenes of many of President Trump's most consequential and controversial decisions since taking office. McGahn was responsible for briefing the president regarding former national security adviser Michael Flynn's contacts with Russian officials, including former acting Attorney General Sally Yates' contention that Flynn could be susceptible to Russian blackmail.
McGahn also reportedly blocked the president from moving forward with threats of firing special counsel Mueller. According to The New York Times, McGahn threatened to resign in June of 2017 if Trump took any action to remove Mueller from his role overseeing the probe.
But McGahn's tenure has also been lauded by Republicans for his role in coordinating the administration's efforts to appoint conservative judges to federal benches across the country, including the president's first Supreme Court justice appointment of Neil Gorsuch.
Senate Judiciary Chairman Chuck Grassley tweeted Wednesday that the president should not to let McGahn leave.
In a statement to ABC News, Grassley's spokesman said the senator's tweet reflected his admiration for McGahn's work regarding judicial nominees.
"Senator Grassley has admired Mr. McGahn’s work over the last two years and has considered him integral to the President’s record-breaking success on filling judicial vacancies," the spokesman said. "From Senator Grassley’s perspective, there’s not been any White House Counsel who has worked so well and so efficiently with the chairman’s office and the Senate Judiciary Committee on judges."
Copyright © 2018, ABC Radio. All rights reserved.