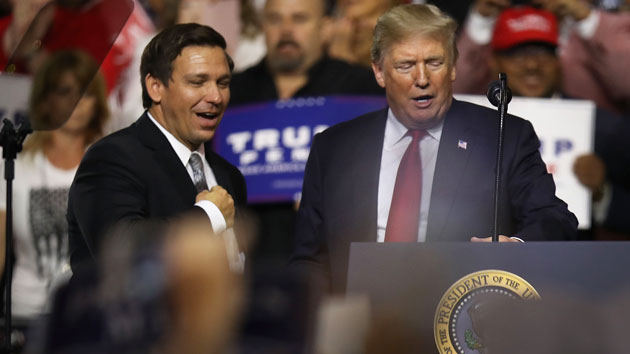 Joe Raedle/Getty Images(WASHINGTON) — Primary season is winding down after voters in Florida, Arizona and Oklahoma settled intra-party sparring Tuesday night, sending nominees from key races up and down the ballot on to the general election.
Arizona Republicans selected Rep. Martha McSally, who shifted closer to President Donald Trump in her race against her two "Trumpier" rivals, to square off against Democratic Rep. Kyrsten Sinema in November, in one of the most consequential Senate races this cycle.
Trump tweeted congratulations to McSally early Wednesday, bashing outgoing Sen. Jeff Flake in the process.
In an election year largely overshadowed by Trump’s overriding presence, Rep. Ron DeSantis clinched the Republican gubernatorial nomination in Florida, after defeating state Agriculture Commissioner Adam Putnam. But even more stunning was the upset defeat of political heiress Gwen Graham by Tallahassee Mayor Andrew Gillum.
The Sen. Bernie Sanders-endorsed longshot could become the first African-American governor in Florida’s history.

Here are some of the top takeaways from Tuesday’s primaries:
The biggest showdowns in the Sun Belt
In one of the most highly anticipated primary nights, Florida and Arizona are now set to host bitter rivalries in November.
Voters in the Sunshine State will face a stark choice after Trump-endorsed DeSantis edged out Putnam Tuesday in a closely watched gubernatorial primary, and will face Gillum in the fall.
The Democratic Governors Association quickly blasted DeSantis after his win in a statement from Executive Director Elisabeth Pearson that said: "Ron DeSantis would bring the worst of Washington, D.C.’s broken policies to Florida. DeSantis bear-hugged Trump to win the primary, adopting the same harmful Washington policies and rhetoric that is hurting Florida’s families."
Putnam held a significant margin over underdog candidate DeSantis early on, but after Trump backed the GOP House member, who stuck closely to the president’s agenda, his lead dissipated.
In a similar outcome on the Democratic side, Gillum’s victory showcases an energized party base in Florida, one that could boost turnout across the board, including for incumbent Sen. Bill Nelson, who is facing a tough challenge from Republican Gov. Rick Scott.
"This is our moment," Gillum said Tuesday at his victory celebration.
Also in Florida, a highly competitive House race will be under a microscope over the next two months, in the state’s 27th Congressional District. Democrats aim to flip a historically red district, which includes most of Miami and has been held by a Republican since the late 1980s. Hillary Clinton won the district by 20 points in the 2016 presidential election.
Competing in November are former Health and Human Services Secretary Donna Shalala, the Democratic nominee, and Republican nominee, journalist Maria Elvira Salazar.
In Arizona, the general election for Flake’s replacement will feature Rep. Martha McSally, who surged to victory over Dr. Kelli Ward and Sheriff Joe Arpaio.
The competition between the three was fierce as the Republican contenders appeared to try to out-Trump each other, each boasting of having the closest ties to the president. Trump remained out of the race through the primary, but the matchup in November will be historic.
Both candidates on the general ballot are female, in a state that has not sent a woman to the Senate. Now, Arizona is poised to do so, as McSally will face Rep. Kyrsten Sinema.
The 'isms': Trumpism and progressivism
Two big winners Tuesday night: Donald Trump and progressive politics.
The two may stand in direct contrast to each other, but they both won out over the competition in Tuesday’s top contests.
Gillum’s victory isn’t just a political victory for Bernie Sanders but is a major notch on the belt for progressive policies and the movement nationwide. The 39-year-old Tallahassee mayor’s victory as the Democratic gubernatorial nominee in the nation’s third-largest state is arguably as important as Alexandria Ocasio-Cortez’s upset over Rep. Joe Crowley in June.
Gillum and Arizona Democratic gubernatorial nominee David Garcia's wins Tuesday were also another triumph for the progressive-aligned Working Families Party, which endorsed both candidates.
"Andrew Gillum and David Garcia just joined an unprecedented slate of gubernatorial nominees who are running people-powered campaigns on progressive policies that will make our states work for the many, not the few," said Joe Dinkin, campaigns director for the Working Families Party. “This new generation of candidates are young, diverse, and unapologetically progressive. And they’re poised to shake up statehouses from Phoenix to Tallahassee."
DeSantis’ triumph in Florida is yet another indication that Republicans in the state are ready to embrace Donald Trump’s style of politics. The candidate had his children literally building a wall in a recent campaign ad, and earned the president’s backing very early in the race, a factor that clearly made a difference in his victory over Adam Putnam.
McSally’s win is less of an outright victory for Trumpism. The candidate embraced many of Trump’s key policies on issues like immigration, and has appeared at numerous White House events alongside the commander in chief, but hesitated to align herself with him as starkly as did Arpaio or Ward.
With most of the competitive Senate races this cycle are now set for November, attention turns to where Trump will campaign next on the Senate battleground map. His next campaign rally is scheduled for Thursday in Evansville, Indiana, where businessman Mike Braun is attempting to unseat Democratic Sen. Joe Donnelly in Vice President Mike Pence's home state.
McCain's legacy a focal point Tuesday
The U.S. Senate seat up for grabs in Arizona this year was Flake's, but the death of Sen. John McCain brought his political legacy in the state front and center Tuesday night.
McSally’s victory was a win for "establishment" Republicans who avoid the complications of having more controversial candidates like Ward or Arpaio at the top of the ticket. But, if she wins in November, she’ll be replacing one of the most prominent Trump-critics in Congress who served alongside McCain for decades and called him a close friend.
But despite McSally's at times cozy relationship with Trump, Flake himself said Tuesday that he was hoping for a McSally victory, which, he says, puts the GOP in the best position to win in November.
"I think McSally will win, I hope she does," Flake told reporters on Capitol Hill, “This is going to be a hard-fought general election and I think long-term, if we don't appeal to a broader electorate and quit trying to drill down harder on the base and just give in to the politics of anger and resentment, we're going to lose big time in the long-term."
That "politics of anger and resentment" is exactly what McCain railed against in the waning days of his congressional career.
Perhaps McSally should heed the advice that South Carolina GOP Sen. Lindsey Graham was given by McCain about dealing with Trump: "Help him when you can, just don’t get sucked into all this bull—-."
Voting on gun violence

An issue often too divisive for elections, has become a central issue in Florida races up and down the ballot this cycle.
In Broward County, home to Marjory Stoneman Douglas high school in Parkland, Lori Alhadeff, the mother of slain 14-year-old Alyssa Alhadeff, will serve on the county’s school board after winning in a landslide.
Alhadeff hopes to deliver on promised changes in the county’s school system after the February massacre shook the community, and the country, as one of the deadliest school shootings in American history.
"I can’t wait to start making change and start making an impact on the school board," she said according to the Miami Herald.
David Hogg, one of the founders, and perhaps most outspoken member, of the March for Our Lives movement, told ABC News’ Tom Llamas and Rick Klein that the group is focused on "making sure young people are voting."
"This summer we registered thousands of voters," he said.
Florida’s candidates at the top of the ticket in the general election will likely be confronted by questions about where they stand on gun control and measures to curb gun violence after months of national debate since the shooting.
After the March For Our Lives in Washington, D.C., Parkland’s teenage activists turned their efforts this summer toward registering young people to vote. While many voted for the first time Tuesday, the students hope to harness the power of a youth electorate to bring sensible anti-gun violence solutions to the gun-friendly state.
Asked how he feels about the night and what’s next for the group heading into November, Hogg responded, "This is not the closing of the chapter, this is the beginning of the book."
Incumbents' show of strength
Tuesday night was a good night for incumbents fending off aggressive primary challenges.
In Florida’s 9th Congressional District, Rep. Darren Soto easily held off former Rep. Alan Grayson, a liberal firebrand that lost the Democratic nomination for U.S. Senate in 2016.
Also in the Sunshine State, Rep. Stephanie Murphy also easily held off primary challenger Chardo Richardson, a progressive challenger that scored an endorsement from Alexandria Ocasio-Cortez.
In Florida’s 5th Congressional District, another freshman Democrat held off a primary challenge. Rep. Al Lawson fended off former Jacksonville Mayor Alvin Brown with roughly 60 percent of the vote.
In Arizona, incumbent Gov. Doug Ducey held off a primary challenge from former Arizona Secretary of State Ken Bennett.
The power of incumbency is formidable, and it showed its strength Tuesday night.
GOP House members advance in bids for higher office
In a departure from a fate plaguing House Republicans this cycle, two notable representatives scored significant wins in bids for higher office Tuesday night.
McSally and DeSantis broke from a trend that has toppled seasoned political contenders, both winning the Republican nominations for Senate and governor in Arizona and Florida, respectively.
A total of thirteen GOP House members have appeared on primary ballots as a candidate for another office, and five GOP House members fell short in a bid for higher office. Of those who lost, three faced either "unserious or nonexistent challengers."
Those suffering losses and an end to their political careers this election cycle include Tennessee Rep. Diane Black, Indiana Reps. Luke Messer and Todd Rokita, Idaho Rep. Raúl Labrador and West Virginia Rep. Evan Jenkins.
McSally overtook Arpaio and Ward, who wrestled over who had the closest ties to the president, while DeSantis’ full-fledged embrace of Trump provided him with a significant bump that brought him over the finish line to edge out Putnam in one of the most closely-watched and competitive primaries.
More potential history in the making
In both the Arizona and Florida gubernatorial races, there is potential history to be made.
Florida has the chance to send its first African-American to the governor’s mansion in Gillum, while David Garica would be the first Latino chief executive of Arizona in more than 40 years.
What has already been a historic midterm cycle for female candidates continued Tuesday night in the Grand Canyon State.
The battle in Arizona between two congresswomen, Martha McSally and Kysten Sinema, ensures that come November, the state will be represented by a woman in the U.S. Senate for the first time in its history.
Copyright © 2018, ABC Radio. All rights reserved.