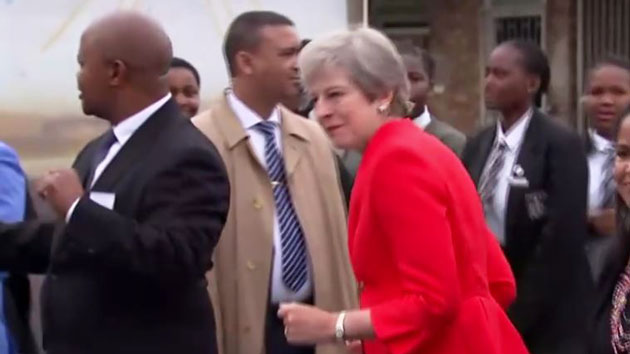 ABC News(CAPE TOWN, South Africa) — British Prime Minister Theresa May Tuesday announced plans to increase the U.K.’s investment in Africa after Brexit, as she arrived in South Africa for her first official trip to the continent.
May, who assumed office two years ago, met with pupils at a Cape Town school, breaking into a spontaneous dance as they greeted her to traditional South African music.
Brits on social media described her moves as “dad dancing” but the prime minister was all smiles and laughed with teachers at the I.D. Mkize School, busting out a second dance before addressing pupils more formally.
Speaking to the school assembly, she thanked the children who greeted her with dance moves, announcing an expansion of a long-running educational scholarship that gives international students placements to study in the U.K.
The scholarship will now be open to 100 more African students.
“What I see before me in this hall today is the future of South Africa,” she said.
May will also visit Nigeria and Kenya on her trip, bringing with her a delegation representing British business interests as part of efforts to deepen U.K.-African ties before Britain’s planned exit from the European Union in March.