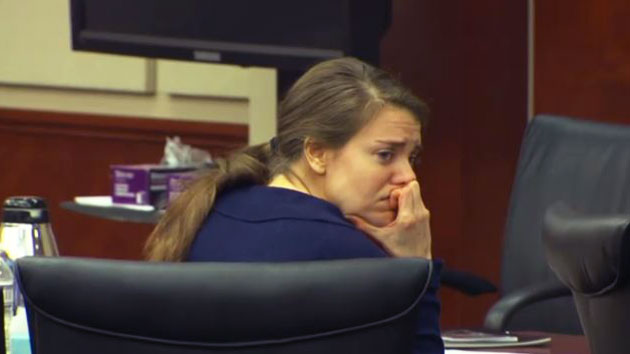 ABC News(HIGHLAND HEIGHTS, Ky.) — The Kentucky woman whose trial garnered national attention three years ago was convicted of murder for the second time on Tuesday in a retrial over her ex-boyfriend's brutal death.
Shayna Hubers, 27, was found guilty of murder on Tuesday more than five years after she allegedly shot and killed her on-again, off-again boyfriend, Ryan Carter Poston, when he allegedly tried to break up with her.
Poston, a 29-year-old lawyer, was found dead in his home in Highland Heights, Kentucky, northeast of Louisville, in October 2012. Hubers claimed Poston was abusive and that she shot him in self-defense, but the jury didn’t believe her.
The retrial jury found her guilty of murder charges after about five hours of deliberation.
Poston’s family said it is “eternally grateful” to the officers who helped them achieve justice after “six long and heartbreaking years.”
"Those who love Ryan now move forward with the integrity, dignity, and kindness that Ryan exemplified throughout his life," the family said in a statement Tuesday. "Today we embrace justice, and yet we do not feel joy. It has been six long and heartbreaking years without our beloved Ryan.”
Evidence, including bizarre video of Hubers dancing and celebrating in an interrogation room just hours after the shooting, led to a conviction against her in 2015, but the verdict was overturned after a jury member was revealed to be a felon. She was originally sentenced to 40 years in prison, but she was granted a retrial.
Hubers once told police officers that Poston was abusive and claimed she shot him in self-defense. Prosecutors used her own words to build their case.
“He’s very vain. One of our last conversations we had that was good was that he wants to get a nose job,” Hubers told police in a recorded conversation. “And I shot him right here. I gave him his nose job he wanted. I broke it.”
Her attorney, David Eldridge, said Poston had physically abused and made her afraid for her life.
"He was grabbing her hair, jerking her head back and forth like she thought her neck was going to snap," Eldridge said in court, according to Cincinnati ABC affiliate WCPO. "The commonwealth has been unable to accept the truth about Mr. Poston. They don't want you to see the whole picture of Mr. Poston and Miss Hubers.”
Hubers is scheduled for sentencing on Wednesday.

Dallas police officer arrested on 2 counts of capital murder
Doctor who prescribed ‘massive quantities of opioids’ charged with murder
Former Maryland police chief facing dozens of attempted murder charges in alleged arsons
Judge returns to bench after son’s murder: ‘I will not be frightened or be afraid to do what I love to do’
Court mulling whether to reinstate 3rd-degree murder charge against Derek Chauvin in George Floyd’s death
Murder warrant out for MIT graduate in killing of Yale student