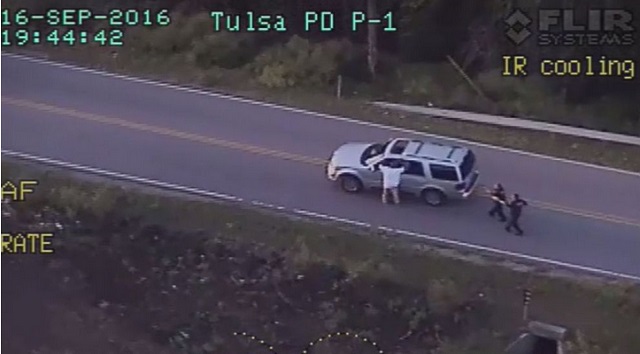 Tulsa Police Department(TULSA, Oklahoma) — Protests have erupted over a class being taught to sheriff's deputies by a white Oklahoma officer who was acquitted of manslaughter charges in the fatal 2016 shooting of an unarmed African-American man.
Despite the demonstrations, however, former Tulsa Police Officer Betty Shelby, now a nearby sheriff’s deputy, went ahead Tuesday with the scheduled class titled "Surviving the Aftermath of a Critical Incident" to Tulsa County sheriff's deputies, officials said.
Word of Shelby’s teaching such a class in Tulsa ignited protests Monday outside the Civic Center in city's downtown area, where one demonstrator, Marq Lewis, called the move "a slap in the face to all African-Americans."
"The reason this is a slap in our faces is that they're putting it in our faces and they're saying to us, 'It's fine, deal with it. We don't care how insensitive it is. We're going to have this class and it's OK,'" Lewis, leader of the grass-roots civil group We the People Oklahoma, said Tuesday morning.
"These are our tax dollars that are being put to use to have this class for other law enforcement officers," Lewis told ABC News. "It's almost as if we, as citizens, don't have a say in saying that we don't want this class going forth."
Shelby was arrested and charged two years ago with first-degree manslaughter in the shooting death of Terence Crutcher, 40, after she came across an idling SUV stopped in the middle of a two-lane roadway and spotted Crutcher walking toward the vehicle.
Police dashcam and helicopter video showed Crutcher with his hands in the air as Shelby and other officers approached him with their guns pointed at him. Crutcher can be seen in the video lowering his hands and apparently attempting to reach into the vehicle when Shelby opened fire, killing him.
Authorities later determined the vehicle window into which Crutcher appeared to be reaching was rolled up at the time and no weapon was found on him or inside his SUV.
Shelby went to trial on manslaughter charges and a jury acquitted her in August 2017, prompting outrage from the African-American leaders in Tulsa and angry protests in the city's streets.
Shelby returned to the police force with back pay. She has since gotten a new job as a sheriff’s deputy in neighboring Rogers County.
Shelby's course, which she teaches outside her regular duties as a sheriff’s deputy, was scheduled to run from 8:30 a.m. to noon Tuesday. She was expected to "describe some of the challenges" that arise after a critical incident, such as officer-involved shootings, including financial, legal and emotional issues, according to a synopsis of the course.
Shelby has taught the course to other law enforcement agencies throughout Oklahoma but this is the first time she has led the class in Tulsa. The class has been certified by the state Council on Law Enforcement Education and Training under mental-health instruction.
"My class is not about the shooting and I do not discuss the shooting,” Shelby said in a statement Monday to ABC Tulsa affiliate KTUL-TV.
"A critical incident is an event that happens to someone that will test the limits of their coping skills. I faced many challenges that I was unprepared for such as threats to my life by activists groups to loss of pay. My class is to help others by sharing some of the skills I used to cope with the stress of my critical incident," her statement reads.
"As law enforcement, we experience many critical incidents throughout our career. These tools that I share are just a few to help them cope with the stress of the critical incidents they have had or will experience."
Rogers County Sheriff Scott Walton told the Tulsa World that he is supportive of Shelby’s class.
“It’s not about opening wounds,” Walton told the newspaper. “It’s about Betty Shelby teaching something that opens law enforcement’s eyes. If this was taught to the community, I think it would open [their] eyes to what law enforcement had to endure.”
During the protest Monday attended by Crutcher's parents, demonstrators carried signs reading "#BanBetty."
"We're saying that you need to get another teacher," Oklahoma state Rep. Regina Goodwin, D-Tulsa, told the crowd.
Goodwin recalled an interview Shelby gave CBS News' "60 Minutes" after her acquittal in 2016 in which she said, "I would rather be tried by 12 than carried by six."
Rep. Goodwin said, "Terence Crutcher didn't get an opportunity to get that statement. Folks are talking about there's a scab on the wound. There's no scab here because there's no healing."
Lewis and other protestors have no problem with the course Shelby is teaching, he told ABC News, but they just find it “tone deaf” that she is being allowed to teach it.
"Betty Shelby went on national television and said that Terence Crutcher caused his own death,” Lewis said, referring to the “60 Minutes” interview. “We don't feel there is any form of rehabilitation.”
Copyright © 2018, ABC Radio. All rights reserved.