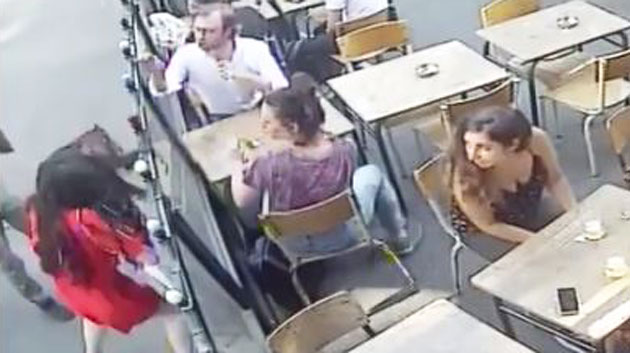 ABC News(PARIS) — A French man who was caught on camera punching a woman in the face was arrested Monday, authorities said.
France's gender equality minister confirmed the arrest in a tweet.
The man was receiving psychiatric treatment at a hospital and was arrested as he was leaving the facility, according to French radio Europe 1. Authorities have not released the man's name.
Last month, Marie Laguerre, 22, posted on her Facebook page a video showing her being hit in the face by a man on a Parisian street.
“Last night, as I was coming back home in Paris, I walked past a man who sexually/verbally harassed me,” she wrote in the post.
“This is an unacceptable behavior," she continued. "It happens everyday; everywhere and I don't know a single woman who doesn't have a similar story. I am sick of feeling unsafe waking in the street.”
“Things need to change, and they need to change now,” she added.
Laguerre filed a complaint at the time and the Paris prosecutor’s office opened an investigation for “violence” and “sexual harassment.”
A few days after the incident, French lawmakers approved a bill that outlaws cat-calling, allowing fines of as much as hundreds of dollars to be handed out on the spot to street harassers.
Copyright © 2018, ABC Radio. All rights reserved.