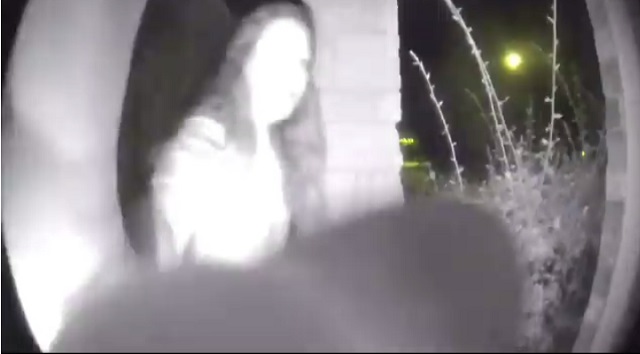 Montgomery County Sheriff's Department(HOUSTON) — A video of a mystery woman who rang the doorbell of a Texas house in the dead of night, wearing what appeared to be broken restraints on both wrists, has some residents of the neighborhood spooked — and internet sleuths intrigued.
The Facebook post with the video, which shows the woman approaching the door of the home after midnight has been shared over 23,000 times as of Tuesday afternoon and more than 5,400 people have commented on it — some from as far as the United Kingdom.
As police scoured the neighborhood and reviewed the surveillance footage in search of the woman, worried residents of Sunrise Ranch said they feared for her safety.
"We still don't know who the girl is — if she's local, if she's from somewhere else, does she come from within the neighborhood," Chris Geros, a neighbor, told "Good Morning America."
"The look on her face, but she was being very very quiet… she just looked distressed," said another resident, Kelly Bordon.
Authorities in the Montgomery County Sheriff's Office are still trying to identify the woman.
"Numerous citizens in the state and outside have sent missing persons flyers suggesting the women in the video is a missing person from their area," the sheriff's office said in a statement on Sunday. "Deputies and Detectives are reviewing these flyers for any similarities, but as of now none are believed to be the women in the video."
Sean Simmonds, a resident who lives in the area, said the woman had rung the doorbell of several different neighbors, but by the time they answered their doors, she had disappeared.
"I've got a 9-year-old daughter at home," another neighbor, Branson Golson, told Houston ABC station KTRK. "It worries me what's going on in the neighborhood."
The Montgomery County Sheriff's Office is asking anyone with information about the woman to contact them at 936-760-5800.
Copyright © 2018, ABC Radio. All rights reserved.