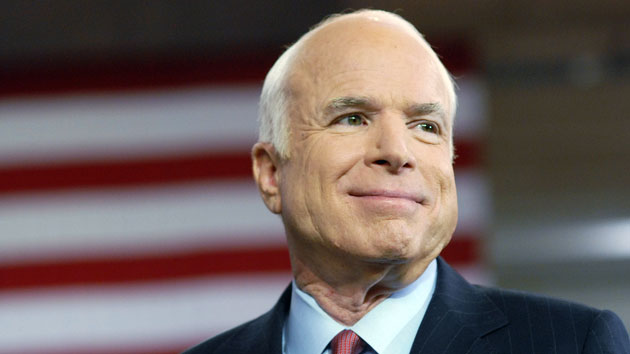 William Thomas Cain/Getty Images(PHOENIX) — The first of five days of memorials honoring the late Sen. John McCain start in his adopted home state of Arizona Wednesday, with his becoming the third person in 40 years to lie in state at the Arizona Capitol in Phoenix.
The longtime senator’s casket will be placed above the mosaic seal that shows the state’s motto, “Ditat Deus,” or Latin for “God Enriches.”
McCain’s casket will be at the center of the memorial service Wednesday, which would have been his 82nd birthday, with chairs set up on all sides and a lectern between the U.S. and Arizonan flags.
The private ceremony, which will begin at 10 a.m. local time, when McCain’s immediate family enters after the casket, with the procession lined by veterans, members of the military, law enforcement and first responders.
The speakers' list is made up of heavy-hitters in state politics, including former Sen. Jon Kyl, who served alongside fellow Republican McCain for three Senate terms, Gov. Doug Ducey, former Rep. Jim Kolbe, who served for more than 20 years, and outgoing Sen. Jeff Flake, all Republicans.
In addition to the speakers with personal ties forged through politics, the ceremony will begin on a personal note with an invocation from the Rev. Edward A. Reese, who used to be the president of the Phoenix high school that McCain’s sons Jack and Jimmy attended.
The ceremony is closed to the public but people will have the chance to pay their respects in the rotunda starting at 2 p.m.
Temperatures are expected to reach 104 degrees in Phoenix Wednesday but that didn’t stop some mourners from getting an early start.
A group of motorcyclists parked their bikes in the lot behind the Capitol Wednesday morning two hours before the ceremony was scheduled to begin. They came from multiple motorcycle groups, as well as being members of the Patriot Guard Riders, with two saying that, as veterans, they felt called to be here.
“He showed up for us,” one man said of the Navy veteran and former prisoner of war, “so we’re showing up for him.”
Copyright © 2018, ABC Radio. All rights reserved.

‘My body is not their property,’ a Texas woman’s journey across state lines for an abortion
White House tells governors: Get ready to start vaccinating kids
Body camera footage shows police officers dragging paralyzed man from a car by his hair
US in middle of constitutional crisis: Former Secretary of State Hillary Clinton on ‘The View’
Kyrsten Sinema has rankled fellow Democrats, but will it matter in her home state of Arizona?
US Marshals find, clear LA Dodgers fan who resembled fugitive John Ruffo