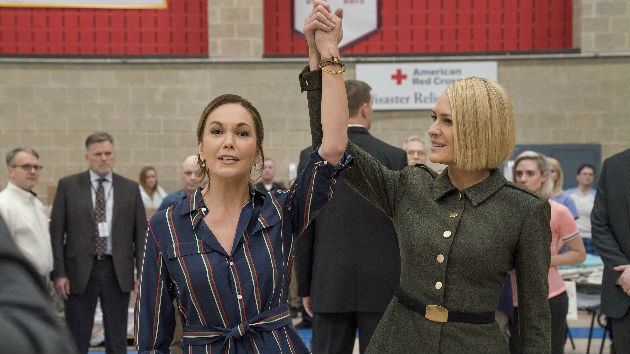 David Giesbrecht/Netflix(WASHINGTON, D.C.) — House of Cards is welcoming some new power players to D.C. this season.
We knew Diane Lane and Greg Kinnear would be joining the cast, but now we know their roles. The two will be playing Annette Shepherd and Bill Shepherd, a sister and brother who run their family’s industrial conglomerate, Shepherd Unlimited. The Shepherds have a powerful influence in politics and are sure to stir up trouble forRobin Wright's President Clare Underwood.
The siblings have a particular vision for the future of America and also share a complicated past with the Underwoods. Cody Fern also joins the cast as Duncan Shepherd, Annette’s son and a next generation D.C. power player.
House of Cards’ sixth and final season has Wright’s Clare Underwood stepping into the spotlight, after the departure of Kevin Spacey following sexual misconduct allegations against him.