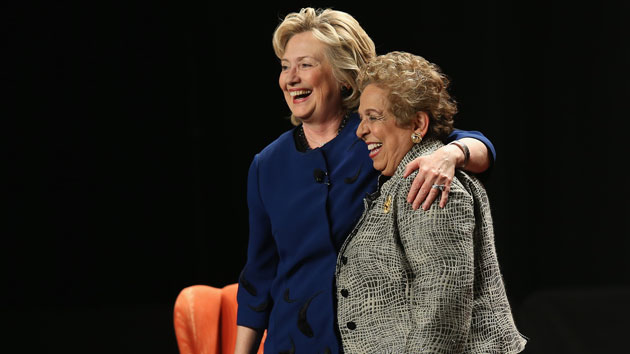 Joe Raedle/Getty Images(WASHINGTON) — Donna Shalala, the former Clinton Cabinet member who's now 77-years-old, proved Tuesday that she's not done yet.
Shalala, former secretary of health and human services under President Bill Clinton, won the Democratic nomination in Florida's 27th Congressional District, an economically diverse area that includes Miami. She'll face long-serving Miami TV news anchor Maria Elvira Salazar in the general election.
Shalala is well-known in the district from her time as president of the University of Miami. It was one of three schools she led, including the University of Wisconsin at Madison and Hunter College in New York. She was also president of the Clinton Foundation.
Some were puzzled by her decision to get back into politics in hopes of becoming a House freshman.
“It took me a while to answer the question of why do I want to do this, but as I got angrier and angrier at Washington, I said: ‘Donna, you've got to step up again and serve your community’,” Shalala told ABC News in March, when she announced her campaign.
But Shalala didn't enter just any race — she chose carefully. Rep. Ileana Ros-Lehtinen, a Republican, decided to retire in April of last year. She'd served the district for almost 40 years. The advantages of an open-seat race, coupled with the fact that the district went to Hillary Clinton in the 2016 election by a margin of almost 20 percentage points, made it a key focus for Democrats trying to take back control of the House in November.
“If you want change, you hire the most experienced, toughest people you can possibly hire. People who can hit the ground running with progressive views and a lifetime of experience,” Shalala said in March. “That’s what you do when you have the toughest situation in politics."
It remains to be seen how her experience in Bill Clinton's administration, and as president of Bill and Hillary Clinton's foundation, will influence voters. In light of the #MeToo movement, which raised new conversations raised about Bill Clinton's treatment of women, Shalala's ties to the former president could prove a disadvantage.
Her opponent, Salazar, who made no mention of President Donald Trump in her victory speech, has political ties of her own to consider.
Asked point blank at her victory party Tuesday night, the newly-minted Republican nominee remained noncommittal on whether her campaign hopes for a visit from Trump.
"Well, we have to think about it. The victory has been given to me by the members of this community and we have Independents, we have Republicans, we have Democrats, and apparently the Republicans thought I was the best fit," Salazar told ABC News' MaryAlice Parks.
“I think the president has done wonderful things for the economy that we need to applaud, and maybe he has not used the right words in other areas or in other topics, but we're going to be discussing that along the way,” Salazar said. “But what I’m telling you is that I’m in no one’s pocket. I’m a daughter of Miami and I know what Miami needs and what district number 27 wants.”
Copyright © 2018, ABC Radio. All rights reserved.