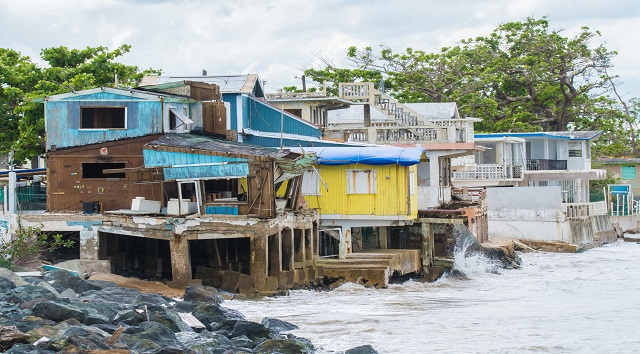 iStock/Thinkstock(SAN JUAN, Puerto Rico) — Using a study from a team of independent researchers, officials in Puerto Rico said they're raising the official death toll from Hurricane Maria to 2,975 from 64.
Researchers have determined that an estimated 2,975 people died from September 2017 through the end of February 2018. The independent study, from George Washington University's Milken School of Public Health, was commissioned by the Puerto Rican government.
At a press conference Tuesday in San Juan, Gov. Ricardo Rossello announced he would be raising the island's official estimate to match that of the study.
Rossello called the announcement "painful" and said it's a time for Puerto Ricans to mourn and reflect.
The GWU report also showed that the risk of dying in the aftermath of Maria was 60 percent higher for those in the poorest communities and 35 percent higher for those aged 65 or older.
"There are huge inequalities in Puerto Rico that were brought up by the hurricane," said Carlos Santos-Burgoa, one of the principal investigators of the study.
The estimate of 2,975 was determined using a mathematical model based on historical patterns, with adjustments made for age and sex, researchers said. That sum is more than 4,500 percent higher than the original estimate of 64.
Dr. Lynn Goldman, dean of the Milken School of Public Health, told ABC News the deaths for the poor and elderly did not stop after February.
"We thought we would capture all the deaths if we looked at the period between September 2017 and February 2018, but in reality, even in February, there was still some excess deaths among the poor and the elderly," Goldman said. "It might make sense to follow through for the next six months to see when the death rates actually return to base line."
Hurricane Maria "caused problems for people for months — loss of electricity, issues with getting food and water, healthcare and other things people needed," Goldman added.
The GWU report also offered a blistering criticism of Rossello and his government, saying there was "inadequate preparedness and personnel training for crisis and emergency risk communication."
These factors "decreased the perceived transparency and credibility of the Government of Puerto Rico," the report said.
Rossello said he takes responsibility for what happened as a result of the passing of the storm.
"Yes, I made mistakes," he said. "We could have done things differently."
The governor announced the creation of a commission that will start by working off the GWU recommendations to improve public health and safety as well as the creation of a registry of people considered vulnerable to future disasters. Rossello also said the commission would update Puerto Rico's preparedness plans to endure stronger hurricanes.
A memorial at the University of Puerto Rico to commemorate the lives lost because of Maria also is planned, the governor said.
Goldman said assistance provided to Puerto Rico needed to include assistance to the island's understaffed Department of Health.
The GWU team plans to conduct a second phase of the study to better understand everything that contributed to the death toll. They're looking for funding for additional phase.
The study's findings come after nearly a year of questions, uncertainty and political sparring over the human toll of the storm.
San Juan Mayor Carmen Yulin Cruz tweeted following the release of the study: "The # of deaths 2,975 reinforces the pain inflicted on the people of PR and the violation of our human rights. THEY WILL NOT BE FORGOTTEN."
She added in the subsequent tweet: "I am sure the small minded will now compare studies and concentrate on the difference in #s. Remember, no matter the # thousands died."
"We need to come to terms with the fact," Goldman told ABC News, "that these storms are getting bigger and there are more of them and we all need to be prepared for them."
President Donald Trump visited Puerto Rico in the days following the storm.
"If you look at a real catastrophe like Katrina, and you look at the tremendous hundreds and hundreds and hundreds of people that died … 16 people versus in the thousands. You can be very proud of all of your people," he said.
Hurricane Katrina claimed more than 1,800 lives, according to the National Hurricane Center.
"The federal government has been, and will continue to be, supportive of Governor Rossello's efforts to ensure a full accountability and transparency of fatalities resulting from last year's hurricanes — the American people, including those grieving the loss of a loved one, deserve no less," White House press secretary Sarah Sanders said on Tuesday. "We are focused on Puerto Rico's recovery and preparedness for the current Hurricane season."
Copyright © 2018, ABC Radio. All rights reserved.