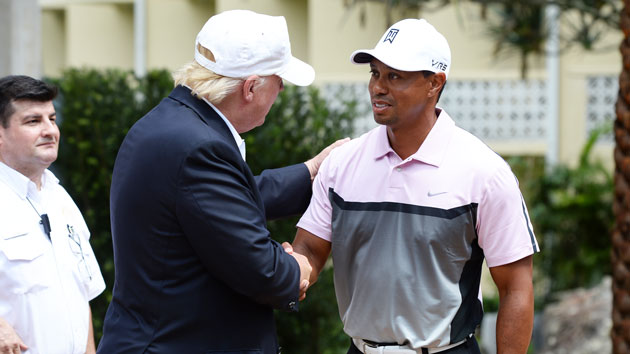 Uri Schanker / Getty Images (WASHINGTON) — President Donald Trump once again took aim at the "fake news media," this time in defense of golfer Tiger Woods.
"The Fake News Media worked hard to get Tiger Woods to say something that he didn’t want to say," Trump tweeted Monday morning. "Tiger wouldn’t play the game – he is very smart. More importantly, he is playing great golf again!"
Trump came to Wood’s defense after a reporter last week asked the golf legend about his relationship with the president.
The reporter at the Northern Trust PGA asked Woods what he would say "to people who might find it interesting that you have a friendly relationship with [the president]?"
"He's the president of the United States,” Woods said. “You have to respect the office. No matter who's in the office, you may like, dislike personality or the politics, but we all must respect the office."
Woods is known to have had played golf with the president before and after Trump's presidency.
"I've known Donald for a number of years," Woods said. "We've played golf together and we've had dinner together. I've known him pre-presidency and, obviously, during his presidency."
Copyright © 2018, ABC Radio. All rights reserved.