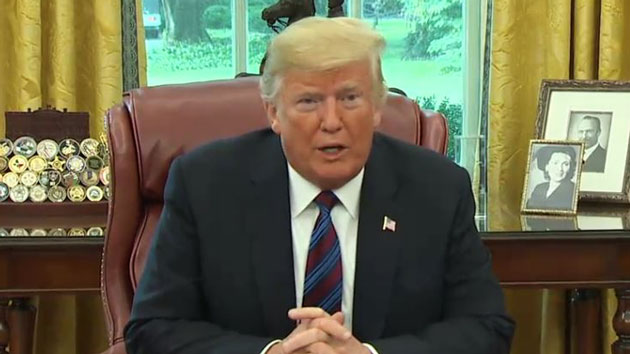 ABC News(WASHINGTON) — After months of negotiations, President Donald Trump on Monday announced the United States and Mexico have agreed on revisions to key parts of the North American Free Trade Agreement (NAFTA) — a trade agreement between the United States, Canada and Mexico.
"It's a big day for trade. It's a big day for our country," Trump said.
Trade negotiations with Canada are still ongoing. "We'll see if Canada can be part of the deal," he said. Trump cast the agreement as the United States-Mexico Trade Agreement, saying he wanted to do away with the NAFTA name because it had "bad connotations."
It's unclear if Trump intends to keep the trilateral framework in place. The president said he's also open to a separate deal with Canada, and said he will terminate the existing NAFTA agreement once there is a deal with both countries. Any changes to NAFTA would require congressional approval before taking effect.
In an interview with ABC News, the president's top trade adviser, Peter Navarro, said Trump has directed U.S. Trade Ambassador Robert Lighthizer to immediately begin negotiations with the Canadians.
"The best-case scenario, they'll join the deal in a three-part deal in the way the discarded NAFTA was," said Navarro.
"It is our wish, Mr. President, that now Canada will also be able to be incorporated in all this," said Mexico's President Enrique Pena Nieto, via speakerphone during the Oval Office announcement.
During the announcement, Trump threatened to put tariffs on all cars made by Canada, likely in an effort to add pressure on America's northern neighbor.
Still, Navarro said that the president would be making a call to Canadian Prime Minister Justin Trudeau Monday.
Trump, who has had a strained relationship with Enrique Peña Nieto over his demands that Mexico pay for a border wall, cited "closer" ties to America's southern neighbor on Saturday.
"Our relationship with Mexico is getting closer by the hour. Some really good people within both the new and old government, and all working closely together … A big Trade Agreement with Mexico could be happening soon!" he tweeted.
The agreement between the U.S. and Mexico Monday mostly focuses on automobile manufacturing.
The two main provisions include a requirement that 40-45 percent of all automobile components be made by workers earning $16 or more per hour, aimed at helping the U.S. compete against low wage auto workers abroad, and also new rules requiring a significant portion of automobile parts — 75 percent — be made in the U.S. and Mexico.
"This is going to be a great day for Detroit," Lighthizer said in a briefing call with reporters.
Administration officials said the border wall and immigration were not a part of negotiations with Mexico.
"That was not part of the discussion today or part of this negotiation. That's a separate matter," Navarro told ABC News. On a briefing call with reporters, Trump administration officials declined to say how the new deal pays for the wall. In the past, Trump has said Mexico would pay for the border wall indirectly via NAFTA.
Following the July election of Andres Manuel Lopez Obrador, Trump predicted that he will have a "very good relationship" with the newly-elected Mexican president.
Trump told reporters in July that he had a 30-minute phone call with Lopez Obrador, who assumes office on Dec. 1, about trade, border security and a potential U.S.-Mexico trade deal.
"I think the relationship will be a very good one. We'll see what happens," Trump said, adding that Mexico's election was "better than anticipated."
Lopez Obrador, a leftist, thanked Trump on Friday for treating Mexicans with more respect.
"For some time now, (Trump) has been very prudent in referring to Mexicans, or he hasn't said offensive things," Lopez Obrador said. "I have to thank him for that. … Up to now, things are going well. There has been respect."
Trump's inflammatory rhetoric about Mexicans began the day he launched his campaign in June 2015.
"When Mexico sends its people, they’re not sending their best…they’re bringing those problems with us," he said at a campaign rally. "They’re bringing drugs. They’re bringing crime. They’re rapists. And some, I assume, are good people.”
Trump made border security a cornerstone of his campaign for president and has repeatedly threatened to rip up NAFTA, blaming the trade agreement, which came into effect in 1994 while Bill Clinton was president, for the loss of manufacturing jobs in America's Rust Belt.