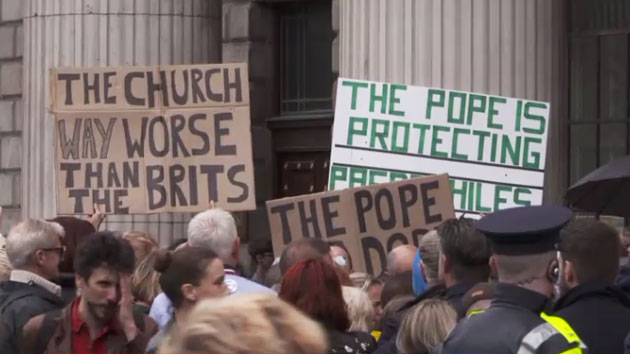 ABC News(WASHINGTON) — In the midst of an already contentious visit to a country ripe with anger over neglected abuses within the Catholic church, Pope Francis declined to address the contents of a letter released Sunday morning alleging that he knew about sex abuse allegations against former Washington, D.C., archbishop Cardinal Theodore McCarrick for years and didn’t take proper action.
The 11-page letter, penned by former Vatican ambassador to the U.S. Archbishop Carlo Maria Viganò, was published on two conservative websites often critical of the pope. It alleges that both Pope Francis and Pope Benedict knew that McCarrick — who resigned from his D.C. post in July after he was accused of abusing adults and minors — was a “serial predator.”
ABC News could not independently confirm the letter’s claims.
On the papal plane after his second day in Ireland, Pope Francis declined to refute or confirm the allegations mentioned in the letter, urging the journalists aboard the plane only to consider the source and make their own judgment.
“I will not say a single word about this,” Pope Francis said, adding that it “speaks for itself.”
In it, Viganò alleges that he told Pope Francis in 2013, “I don’t know if you know Cardinal McCarrick, but if you ask the Congregation for Bishops there is a dossier this thick about him. He corrupted generations of seminarians and priests and Pope Benedict ordered him to withdraw to a life of prayer and penance.”
Viganò alleges that McCarrick was sanctioned at one point by Pope Benedict — though he admits it was after “incredible delay” — but was “rehabilitated” under Pope Francis.
“[Pope Francis] must honestly state when he first learned about the crimes committed by McCarrick, who abused his authority with seminarians and priests,” wrote Viganò, a well-known conservative official who is critical of the pope’s more-liberal approaches on social issues.
He asserted that the pope only took action to discipline McCarrick after media reports began to circulate this summer and, in order to "tear down the conspiracy of silence … not so dissimilar from the one that prevails in the mafia." Viganò called for Pope Francis to resign.
“Pope Francis must be the first to set a good example for cardinals and bishops who covered up McCarrick’s abuses and resign along with all of them,” wrote Viganò.
McCarrick, 88, held his position as archbishop until an accusation that he molested a 16-year-old altar boy while serving at the Archdiocese of New York was found credible by the church and a July report from The New York Times found that McCarrick coerced seminarians into sexual relationships.
The Archdiocese of Washington rejected the idea that McCarrick's successor, Cardinal Donald Wuerl, ever received reports about McCarrick.
"In spite of what Archbishop Vigano’s memo indicates, Cardinal Wuerl did not receive any documentation or information during his time in Washington regarding any actions taken against Archbishop McCarrick," Chieko Noguchi, director of Media and Public Relations at the Archdiocese of Washington, said in a statement.
Reached for comment, McCarrick’s attorney Barry Coburn called Viganò’s words “serious allegations.”
“Archbishop McCarrick, like any other person, has a right to due process. He looks forward to invoking that right at the appropriate time,” Coburn said in a statement.
Just hours before addressing the letter, the pope made an unprecedented plea for forgiveness at his open air mass in Dublin, giving a detailed list of sins committed by the Church, including abuses of power, conscience, and sexual abuse.
McCarrick was the first cardinal in history to resign over sex abuse allegations, and did so a few weeks before a grand jury report in Pennsylvania found that over 300 “predator priests” statewide had abused nearly 1,000 victims over eight decades — all of which contributed to the sentiment of anger Pope Francis confronted in Ireland over the weekend, a country that has also been rocked by revelations of wrongdoing in the Church.
Max Krzyzanowski, a protester and organizer of "Nope to the Pope," a protest in Dublin pinned to the papal visit, said he expects it to get messier before the system cleans up.
"I think he knows a great deal more than is in the public domain. I think that many things, many secrets are going to be revealed over the next years," Krzyzanowski said.
Viganò’s letter also makes clear he differs sharply from the pope on homosexuality and the church. More than once, he blamed the widespread sexual abuse in dioceses across the world on the “homosexual networks” that “strangle innocent victims and priestly vocations, and are strangling the entire Church.”
“The homosexual networks present in the Church must be eradicated,” Viganò wrote in the letter.
Pope Francis — who famously said of gay priests, “Who am I to judge?” — was caught up in a public confrontation with Viganò once before during a trip to the U.S. in 2015, when Viganò arranged for him to meet with Kim Davis, a Kentucky county clerk who refused to give same-sex couples their marriage licenses after the Supreme Court declared it legal.
Francis also addressed the issue of gay parents in the same interview Sunday while he was leaving Ireland. He gave his advice to parents of a child who comes out as gay, saying, "There are many things one can do with psychiatry, to understand things. Another thing is when it shows itself after 20 years of age or so. But I’ll never say that silence is a remedy."