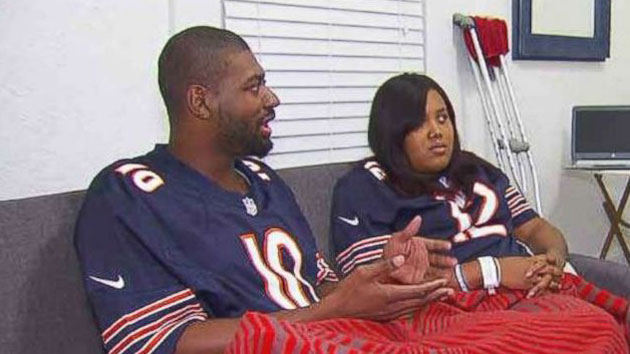 ABC News(JACKSONVILLE, Fla.) — Taylor Poindexter and Marquis Williams spent over four hours a day preparing for Sunday's "Madden NFL 19" tournament in Jacksonville, Florida, but an "eternity" trying to escape with their lives after a disgruntled competitor opened fire on those in the restaurant.
"We went to the bar to order a pizza, so no more than probably two or three minutes sitting at the bar we just hear a 'pop' and it sounded like a balloon," Williams told ABC News after the shooting. "But it took a quick second for it to dawn on us that there weren't any balloons anywhere in the restaurant and then we just heard probably two or three more 'pops' and we realized it wasn't anything other than gunshots and we got up and we took off running toward the door.
Williams said there were anywhere from 60 to 80 people in the confined space of Chicago Pizza, where the tournament was being held in a video gaming area at the back of the restaurant. Both Poindexter and Williams had already been eliminated and were watching the competition when the shooter opened fire.
"We didn't see him fire off the first shot but me, personally, I saw him fire off the second, third or fourth shots as he was backing out of the area," Williams continued. "So we took off running. I was actually first to make it out, but I fell over people and I was tripping up myself. … It felt like eternity, but it was probably in the span of a minute and [people] were running yards in front of me and I don't see her anywhere. I'm screaming her name and for a few seconds I didn't see her, and then she finally emerged."
Poindexter said she was "pushed" and "trampled" as dozens of gamers fled for the exits. She suffered a sprained ankle in rush to escape, but was treated and released Sunday.
"We hit the floor; I was pushed, trampled and stuff, and I had to get over [people] to get out," Poindexter said. "The best way I can describe it is, 'I need to get out, I'm trying to live.'"
Jacksonville police identified the gunman as David Katz, a 24-year-old resident of Baltimore, and a participant in the $5,000 tournament.
Two people were killed in the shooting before Katz took his own life, police said. Another 11 people were injured by gunfire at The Landing, a waterfront mall in downtown Jacksonville. Two others, including Poindexter, were injured as they tried to escape.
Three patients were taken to Memorial Hospital, all of whom are in stable condition.
"I can tell you that all three patients who came here are in stable condition. I have been allowed to release their names so that their families are aware that they are OK," Michael Samotowka, trauma medical director at Memorial Hospital, said. "Their names are Alex Madunic, George Amadeo and Chris McFarland. One of those patients did have an operation today, another will have an operation tomorrow. But again, all three of them are in stable condition."
UF Health Jacksonville treated six patients, five of whom were in good condition, including four discharged, and one in serious condition, the hospital said in a statement.
Shawn Richardson was outside the restaurant when she heard gun shots and saw people pouring out in the rush to escape.
"I saw some children leave the entrance to The Landing; they had backpacks on their backs and they were running fast, they were hauling the mail going so fast," she said.
Thadys Gilder, who said he's a homeless veteran and former Marine, was at the restaurant when he came out of the restroom and heard someone saying, "I'm hit, I'm hit, I'm hit."
"I heard people running out, so that's what me go assess the situation, so as soon as I got everybody out of the building I went in. … I went around the back of the bar where they serve drinks and saw a man laying on his stomach, so what I do is turn him over on his stomach, feel for the pulse. I feel no pulse, so I took my shirt off, my brand new white T-shirt, and I applied pressure to the wound — feel it again and there was a pulse."
Copyright © 2018, ABC Radio. All rights reserved.