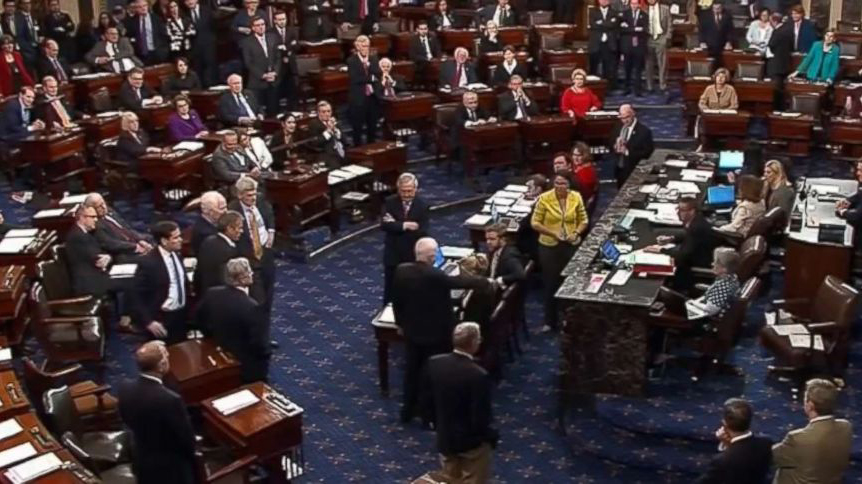 C-SPAN(PHOENIX) — The residents of Bisbee, a quirky old mining town in Arizona just miles from the Mexican border, pride themselves on being what they call a "blue pocket in a red state."
But on Saturday night, just hours after Sen. John McCain died, they all had kind things to say about their state's longtime Republican senator — many of whom cited his "thumbs down" vote against the so-called skinny repeal of Obamacare as a shining moment for him.
"He voted his conscience. When someone votes based on American values and not just with their party, it’s hard not to admire him," said Gail Covington McBride, a Bisbee resident.
Like many of those who spoke to ABC News, Covington McBride is a Democrat who never voted for McCain during his six terms in office.
That said, she said she wrote to his office over the years on various issues.
“John McCain was such a leader,” she told ABC News Saturday night. "And he was a Republican, but I supported him."
Her husband James McBride said McCain "still had common sense, like back in the old days.”
Pat Hawks was another Democratic Bisbee resident who cited the now-famous "thumbs down" moment as one in which McCain put the country first over party.
"I was never a John McCain fan," Hawks said, citing the conservative senator's politics. "[But] I was really proud of him that he stood up, especially in the health care vote.
“He was really somebody who really was a public servant," she added.
For so many Republicans, the opposite is true. President Donald Trump repeatedly slammed McCain’s "thumbs down" moment, most notably in February at the Conservative Political Action Conference when he alluded to McCain, calling the situation “a mess.”
More recently at campaign rallies this summer, Trump criticized the vote, typically hinting at McCain without mentioning his name and then slamming the “thumbs down.”
On Friday, hours after it was announced that McCain would no longer be seeking cancer treatment, a group of Republican Arizonans gathered to hear a Senate-hopeful and took time to criticize their then-sitting senator over the vote.
Christian Lamar, who attended Kelli Ward’s rally near Phoenix, said McCain was "selfish" for having voted against the Obamacare repeal. Lamar did say that he hoped the senator's family "is comforted during this time," but then went on to call McCain "self-centered."
Jeff Miller, who drove three hours to attend the Ward event, said that "for decades, I've been disappointed in our senators." Miller said McCain "was conservative for the last year [of a Senate term]" before moving back to the center or, in his view, left, after being re-elected.
Darryl Bradshaw said he was "sorry" about McCain's decision to end his cancer treatment, and noted, "I feel for the guy." But he also said that while he had voted for McCain in the past, he wouldn't have done so again because of the Obamacare vote.
There were some in attendance at Ward's event who moved past the politics in the wake of the news of his stopped treatment. Sherman Patibanda, who was wearing American flag cowboy boots as he waited for Ward's campaign bus to arrive, said he "always liked Mr. McCain."
"I've always had great respect [for him]," Patibanda said. "Very brave man."
Back in Brisbee, that was a popular sentiment Saturday night. The bravery of the former prisoner of war and "maverick" politician was a point of admiration across party lines.
“He showed as much courage in the last two years as he did when he was a prisoner of war in the '70s," David Brown, a Bisbee resident, said. "It’s heartbreaking.”