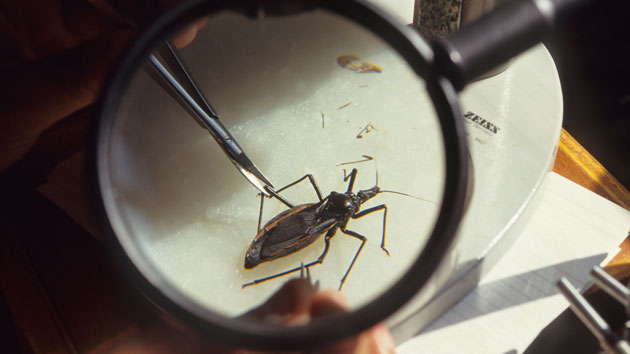 Universal Images Group via Getty Images(NEW YORK) — A rare parasitic disease that can lead to heart failure or stroke may be more common in the United States than many medical providers realize, with an estimated 300,000 people affected.
Chagas disease is spread by an insect known as the kissing bug. An estimated 8 million people in Central and South America are infected, but the disease has also been reported in several American states — Florida, Texas, Mississippi, Tennessee, Arkansas, Arizona, and Massachusetts.
Most people infected will not develop any signs or symptoms, but about 30 percent of those with the parasite can become chronically ill. The American Heart Association in a new report urges physicians in the U.S. to be aware of the possibility that their patients carry this potentially dangerous infection.
Here is what you need to know about the disease.
What is Chagas disease?
Chagas disease is an infectious disease caused by a parasite called Trypanosoma cruzi. The parasite spreads to people and animals via the Triatomine bug, an insect that carries the parasite in its feces. It is also known as the kissing bug because it tends to bite humans around the mouth or eyes, usually at night. Parasites enter then make their way in through the bite, rub or scratch.
The disease is most common in Central and South America, but it has also been diagnosed in people in the U.S., Spain, Italy, France, Switzerland, the United Kingdom, Australia and Japan.
In the U.S., the disease has mostly been reported in southern states but also in Massachusetts. Most people in the U.S. with the disease were likely infected before arriving in the country, according to the American Heart Association.
The parasite can hide in the body for decades.
How does Chagas disease spread?
Most cases of Chagas occur following an insect bite. It can also spread from a pregnant woman to her baby, and through blood transfusion, organ transplantation, consumption of uncooked food contaminated with the feces of infected bugs or accidental laboratory exposure, the CDC said.
Chagas does not spread from person to person through normal contact with people or animals.
Experts also say it’s safe for a mother who has Chagas disease to breastfeed, as long as she does not have blood in the breast milk or cracked nipples.
What are the signs, symptoms and long-term health impact of Chagas disease?
Initial symptoms may include fever, fatigue, body aches, headache, and rash. There can also be local swelling where the bite happened and the parasite entered the body. These symptoms usually go away in days to weeks. Rarely, young children can develop severe inflammation to the heart muscle or brain in the initial phase.
The chronic phase of the disease can occur in about 30 percent of infected people and involve cardiac complications, including heart rhythm problems, heart muscle malfunction, stroke, cardiac arrest or and even sudden death.
About 70 percent of people do not develop any signs or symptoms, and hence the recent warning asking physicians to be attuned to the disease.
“Chagas disease causes early mortality and substantial disability, which often occurs in the most productive population, young adults, results in a significant economic loss,” said Maria Carmo Pereira Nunes, the doctor and co-chair of the committee that produced the American Heart Association statement in a written comment to ABC News.
What is the treatment?
Chagas disease is treated with anti-trypanosomal medication (nifurtimox or benznidazole), which is only available through CDC.
Who is at risk and how can you minimize risk?
Experts believe that most of about 300,000 people are living with Chagas disease in the U.S. had the infection before arriving in the country.
For people living or traveling in in heavily-affected countries, the World Health Organization recommends avoiding unpasteurized sugar cane juice or acai fruit juice which can be contaminated with insect feces containing the parasite and avoiding houses with unplastered adobe walls or thatch roofs.
Copyright © 2018, ABC Radio. All rights reserved.