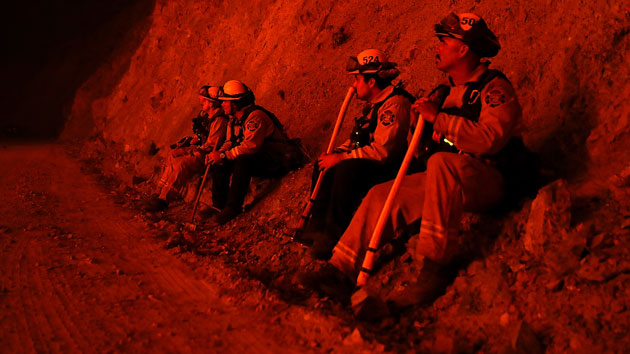 Justin Sullivan/Getty Images(SANTA CLARA COUNTY, Calif.) — Verizon will stop imposing data restrictions on emergency first responders battling natural disasters, the communications giant announced Friday.
Santa Clara County Fire Chief Anthony Bowden accused Verizon in a lawsuit of intentionally slowing down firefighters' data, even though the fire department had an "unlimited data plan."
The lawsuit, filed by 22 states and the District of Columbia, challenges the Federal Communications Commission's repeal of net neutrality rules, which prevented internet service providers from purposely slowing the data, called "throttling," and blocking or discriminating against users, platforms or content providers.
In addition to California firefighters, Verizon has also lifted speed cap restrictions for first responders in Hawaii ahead of Hurricane Lane, it said. Verizon will also lift restrictions in the event of future disasters.
The company apologized Friday, saying it did not "live up" to its promise of "service and performance excellence" when the practice "failed some first responders on the line, battling a massive California wildfire."
"First responders put themselves on the line each and every day," Mike Maiorana, Verizon senior vice president of public sector," said in a statement. "And every day, we are eternally grateful for their bravery and efforts."
Verizon will also work closely with mission critical first responders to refine its service plan to better meet unique needs, it said.
In the lawsuit, Bowden said internet systems are important "in providing fire and emergency response, particularly for events like large fires which require rapid deployment and organization" of personnel, resources and equipment.
Bowden detailed how the data throttling affected their ability to provide timely responses and coordination in the midst of the massive wildfires, which included the largest ongoing wild fire in California history, the Mendocino Complex Fire. As they fought the fire, the department deployed a unit called OES Incident Support Unit 5262 to "track, organize and prioritize routing of resources from around the state and country to the sites where they are most needed," Bowden said.
He added that incorrect or delayed deployment of resources in these situations could lead to the loss of property or even loss of life.
On top of that, the data restriction was so severe that routine and basic digital functions were "rendered useless," Captain Bill Murphy, Santa Clara County Fire public information officer, told ABC News.
"It was so slow you couldn’t perform basic work or communicate through email," he said, which led some crew members to resort to using their personal devices.
The fire chief said the team was not able to carry out its plans as effectively as it should have been.
"You’re there to perform what is an important piece of coordination effort," and to not be able to do that was "frustrating" for everyone, Murphy said.