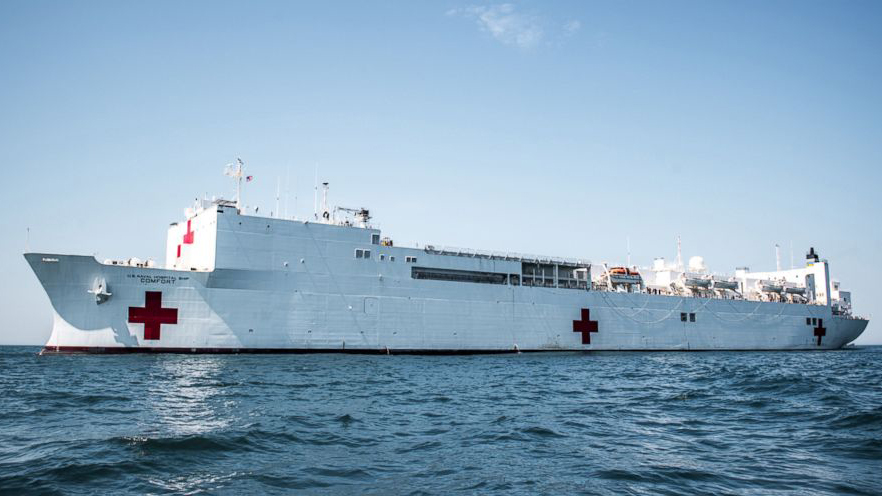 Mass Communication Specialist 3rd Class Jonathan Clay/U.S. Navy(WASHINGTON) — The U.S. is sending a Navy hospital ship off the shores of Colombia this fall to provide urgent medical care for Venezuelan refugees.
In a bitter feud with the U.S., Venezuela's President Nicolas Maduro has refused all American aid.
Defense Secretary James Mattis announced the decision on Friday after a visit to Bogotá, Colombia where he had breakfast with President Iván Duque. The Pentagon confirmed on Monday that Duque had requested the assistance to relieve stress on Colombia's healthcare system.
An estimated 2.3 million Venezuelans have fled their country in the wake of a devastating economic crisis that has caused shortages of food and medical supplies. Over one million of those refugees have crossed the border into Colombia, creating what Mattis called a "destabilizing impact" on the country.
"It is an absolutely a humanitarian mission, we’re not sending soldiers, we’re sending doctors," Mattis told reporters. "And it’s an effort to deal with the human cost of [Maduro and his increasingly isolated regimes."
Pentagon spokesperson Col. Rob Manning said on Monday that the ship will be the 894-foot long USNS Comfort, one of two U.S. Navy hospital ships and one of the largest trauma centers anywhere in the United States.
The Comfort has a long history of responding to humanitarian disasters.
Last October, the ship arrived off the coast of Puerto Rico to assist in hurricane relief efforts. In 2010, it deployed to Haiti following a catastrophic earthquake and, in 2005, the Gulf of Mexico in the aftermath of hurricanes Katrina and Rita.
"The hospital has a full spectrum of surgical and medical services including four X-rays, one CAT scan unit, a dental suite, an optometry and lens laboratory, a physical therapy center, a pharmacy, an invasive angiography suite and two oxygen-producing plants," the Navy said.
The ship also maintains up to 5,000 units of blood at any given time for its medical services.
The United Nations said last week that the shortage of medical supplies inside Venezuela has "led to a sharp deterioration of the quality of hospitals," according to the Associated Press.
United Nations officials pointed to a rise in diseases that had formerly been eradicated, like measles, malaria, tuberculosis and diphtheria. Officials also said that as many as 100,000 HIV patients are at risk without access to necessary medications.
The U.S. has provided over $60 million for Venezuelan refugees, according to the administrator for the United States Agency for International Development (USAID), Mark Green.
"Five thousand new migrants enter Colombia each and every day, real-time, day after day," Green said earlier this month after a visit to the region. "They're desperately seeking food, emergency medical care. They're seeking survival."
He said the current U.S. aid is aimed at "medical attention, emergency food assistance, safe drinking water, hygiene supplies, shelter, and protection from violence and exploitation."
The money has provided assistance in Colombia, Brazil, Peru, and Ecuador, but not in Venezuela itself where President Maduro does not allow U.S. aid.
"We stand ready to offer humanitarian assistance to suffering families who remain in Venezuela, if only President Maduro will allow us the access and the chance to extend a helping hand," Green said.
Mattis described Colombian officials as "enthusiastic" about the arrival of the Comfort.
There is not a timeline for the ship's arrival and details about the composition of personnel on board are still being finalized, according to the Pentagon.