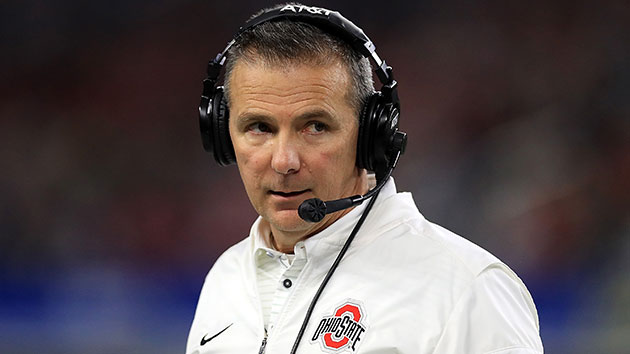 Ronald Martinez/Getty Images(COLUMBUS, Ohio) — An independent investigation into how Ohio State's national championship-winning head football coach Urban Meyer handled domestic violence accusations against a staff member will be completed Sunday, the school said Friday.
The school's Board of Trustees appointed an independent group to investigate how Meyer, one of the highest-paid coaches in college football, treated allegations of abuse by the wife of former Ohio State assistant football coach Zach Smith. Courtney Smith, now Zach's ex-wife, told Stadium on Aug. 1 that she believed Meyer was aware of a 2015 claim of abuse against her then-husband.
Courtney Smith said she spoke to Meyer's wife, Shelley; showed her pictures of bruises allegedly from the abuse; and told Shelley to speak to her husband.
Meyer was placed on administrative leave just hours after her interview was released.
The coach said at Big Ten Media Day on July 24 that he was unaware of the 2015 domestic violence incidence by Smith, only to later apologize in a statement following his placement on leave and say, "My intention was not to say anything inaccurate or misleading. However, I was not adequately prepared to discuss these sensitive personnel issues with the media, and I apologize for the way I handled those questions."
The independent investigation will wrap up its findings on Sunday, and then prepare a report to be delivered to the Board of Trustees sometime next week, Ohio State said in its statement Friday.
"As required by law, public notice of the meeting will be released at least 24 hours in advance," the school said. "Following deliberations with the board, and appropriate time for consideration, President Michael V. Drake will announce his decision."
It's unclear what those penalties could include.
Offensive coordinator Ryan Day has served as head coach while Meyer is on leave.
Zach Smith was fired by Ohio State in July after he was charged with misdemeanor criminal trespass during a dispute with Courtney Smith. He pleaded not guilty. The charge was just the latest in a number of domestic incidents involving the couple. Zach Smith was arrested in 2009 for allegedly abusing Courtney Smith while she was pregnant, but she ultimately decided not to press charges, Stadium's Brett McMurphy reported. The Columbus Dispatch reported that police responded to the couple's home for the 2015 incident, but no charges were filed.
Julia Leveridge, Courtney Smith's lawyer, told Good Morning America on Aug. 13 that her client had spoken to investigators and was "thankful for the support she has received during this time."
Meyer has won three national championships as a head coach, including two at the University of Florida and one at Ohio State. He will make $7.6 million in 2018.
Copyright © 2018, ABC Radio. All rights reserved.