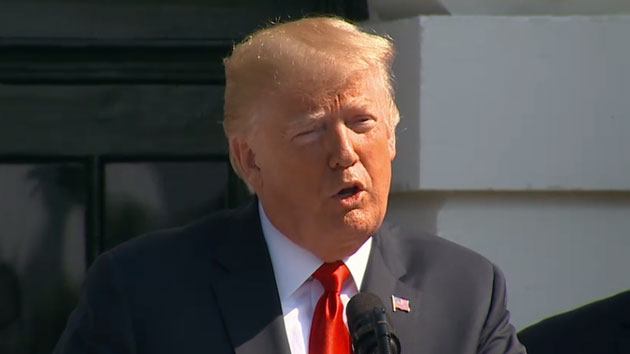 ABC News(COLUMBUS, Ohio) — President Donald Trump escaped the growing scandal shrouding the White House this week in a cloud of controversy, jetting off to the Buckeye state on Air Force One to attend the Ohio Republican Party annual dinner.
After a week of bombshells that included a plea deal by his former personal lawyer, as well as the conviction of his former campaign chairman, Trump largely avoided any and all discussion of his associates entangled in those scandals as well as the Russia investigation.
Trump stuck to his stump speech, recounting his administration’s accomplishments and actions since he took office – focusing his remarks on the economy and immigration while promoting the GOP’s full slate of candidates on the ballot this fall in Ohio.
“We must work every day until November to elect more Ohio Republicans so we can continue to make America great again,” Trump said.
Trump blasted Democrats for calling for the abolishment of Immigration and Customs Enforcement, recounting the murder of Mollie Tibbetts, allegedly at the hands of an undocumented immigrant, warning that their policies “are destroying lives” and “spilling innocent blood.”
“We believe that any party that puts criminal aliens before American citizens should be voted out of office, not into office,” Trump said.
The president told supporters that he does not foresee a blue wave of Democratic support on the horizon this fall, though he conceded that holding the House majority will be tough.
“I don’t see Ohio as liberal. Are you liberal? I don’t get it,” Trump said. “The truth is a vote for any Democrat in November is a vote for Chuck Schumer, Nancy Pelosi and who? The legendary Maxine Waters – the de facto head of the Democratic Party. Congratulations. Maxine didn’t know it. I’m just telling her.”
Several GOP lawmakers attended, including Sen. Rob Portman and Rep. Jim Jordan, a dark horse candidate for House Speaker who the president called “very tough.”
But the Buckeye state’s top elected Republican and frequent Trump critic, Gov. John Kasich, did not greet the president upon his arrival in Columbus on Friday afternoon or attend the dinner.
Attendees paid $250 each to attend the dinner, which party officials claimed a record number of supporters attended.
Copyright © 2018, ABC Radio. All rights reserved.