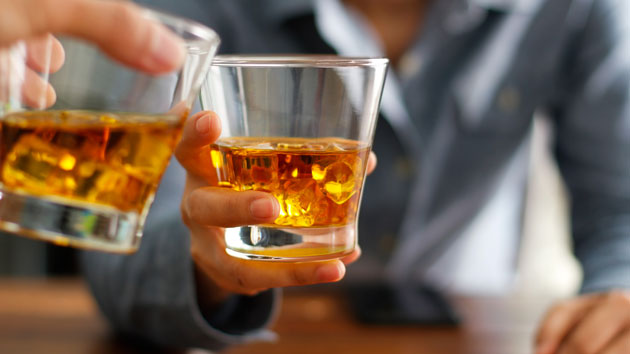 iStock/Thinkstock(NEW YORK) — Bad news for the 2.4 billion people around the world who drink alcohol regularly: There is no level of alcohol that is good for health, according to a new study in the journal The Lancet.
Using data from the Global Burden of Diseases, Injuries, and Risk Factors Study, newer data analysis methods, and a review of previous studies, the researchers calculated the levels of alcohol consumption and the rates of alcohol-related health problems for 195 countries from 1990-2016.
According to their estimates, drinking one alcoholic drink per day for one year increases the risk of developing one of the 23 alcohol-related health problems by 0.5 percent. These include cardiovascular disease, different cancers, intentional and unintentional injuries, communicable diseases, and more. Without drinking, 914 of every 100,000 people will develop one of these 23 conditions. The number goes up to 918 when people drink an average of one alcoholic drink per day, and the risk goes up from there for each additional alcoholic drink consumed.
Low levels of alcohol consumption have previously been thought to be protective against heart disease, diabetes, and other health conditions. This study was only able to find a protective effect between low levels of alcohol consumption and a specific type of heart disease known as ischemic heart disease. But given the risk of alcohol-related health problems, the authors concluded the protective effect of alcohol was offset by the risks associated with its consumption.
“Previous studies have found a protective effect of alcohol on some conditions, but we found that the combined health risks associated with alcohol increase with any amount of alcohol. … Although the health risks associated with alcohol starts off being small with one drink a day, they then rise rapidly as people drink more," said lead author of the study Dr. Max Griswold from the Institute for Health Metrics and Evaluation, University of Washington, in a press release.
"Policies focusing on reducing alcohol consumption to the lowest levels will be important to improve health,” added Griswold.
The United States Department of Agriculture (USDA) in its 2015-2020 Dietary Guidelines for Americans recommends that if alcohol is consumed, it should be consumed in moderation — up to one drink per day for women and two drinks per day for men.
“[This study] is showing a statistical association between any level of drinking and an elevated risk of poor health outcomes that, in aggregate, may reduce one’s lifespan,” said Dr. Nasir Naqvi, assistant professor of clinical psychiatry at Columbia University Irving Medical Center, who was not involved in the study, in an interview with ABC news.
“There are many seemingly benign things in life that statistically increase the risk of death, such as driving, swimming at the beach, etc. Are you also going to stop doing these things because of this statistical association?” said Naqvi.
For those who want to reduce the risk of illness and death by all means, Naqvi recommends they stop drinking. But he says that “if low-level drinking has some benefit to your life; it enhances your social life and facilitates overall wellbeing, then for some people this may be more important than prolonging your life by every possible means.”
Copyright © 2018, ABC Radio. All rights reserved.