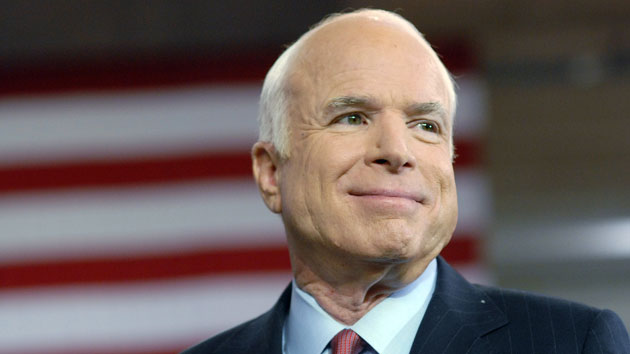 William Thomas Cain/Getty Images(SEDONA, Ariz.) — Senator John McCain, a Vietnam War hero with more than 35 years of public service and who became one of the most distinctive figures in modern American politics, died Saturday at his home in Arizona. He was 81. McCain had announced just one day earlier that he'd stopped treatment for the aggressive glioblastoma brain tumor he'd been fighting for just over a year.
Senator McCain's friends, family and colleagues reacted to his passing.
McCain's wife Cindy tweeted, "My heart is broken. I am so lucky to have lived the adventure of loving this incredible man for 38 years. He passed the way he lived, on his own terms, surrounded by the people he loved, in the place he loved best."
McCain's daughter Meghan tweeted a statement that said, in part, "His love and his care, ever present, always unfailing, took me from a girl to a woman — and he showed me what it is to be a man…But in this loss, and in this sorry, I take comfort in this: John McCain, hero of the republic and to his little girl, wakes today to something more glorious than anything on this earth. Today the warrior enters his true and eternal life, greeted by those who have gone before him, rising to meet the Author of All Things."
President Donald Trump tweeted, "My deepest sympathies and respect go out to the family of Senator John McCain. Our hearts and prayers are with you!"
In a statement, former President Barack Obama said, "John McCain and I were members of different generations, came from completely different backgrounds, and competed at the highest level of politics. But we shared, for all our differences, a fidelity to something higher — the ideals for which generations of Americans and immigrants alike have fought, marched, and sacrificed."
Obama continued, "We saw our political battles, even, as a privilege, something noble, an opportunity to serve as stewards of those high ideals at home, and to advance them around the world. We saw this country as a place where anything is possible – and citizenship as our patriotic obligation to ensure it forever remains that way…few of us have been tested the way John once was, or required to show the kind of courage that he did. But all of us can aspire to the courage to put the greater good above our own. At John’s best, he showed us what that means. And for that, we are all in his debt."
Arizona Governor Doug Ducey has ordered that all flags in the state be lowered to half-staff "in honor and remembrance" of McCain.
Sen. Lindsey Graham, McCain's longtime friend and colleague, tweeted, "America and Freedom have lost one of her greatest champions. ….And I’ve lost one of my dearest friends and mentor."
U.S. Senate Majority Leader Mitch McConnellissued a statement that said, in part, "In an era filled with cynicism about national unity and public service, John McCain’s life shone as a bright example. He showed us that boundless patriotism and self-sacrifice are not outdated concepts or clichés, but the building blocks of an extraordinary American life….It’s an understatement to say the Senate will not be the same without our friend John. I will treasure the many memories we’ve shared together through the years."
Former Vice PresidentJoe Biden said in a statement, "John McCain’s life is proof that some truths are timeless. Character. Courage. Integrity. Honor. A life lived embodying those truths casts a long, long shadow. John McCain will cast a long shadow. His impact on America hasn’t ended. Not even close. It will go on for many years to come…America will miss John McCain. The world will miss John McCain. And I will miss him dearly."
McCain's former running mate Sarah Palin posted a Facebook message that said, "Today we lost an American original. Sen. John McCain was a maverick and a fighter, never afraid to stand for his beliefs. John never took the easy path in life — and through sacrifice and suffering he inspired others to serve something greater than self. John McCain was my friend. I will remember the good times."
Senator Chuck Schumer said he'd introduce a resolution to name the Russell Senate Office Building after McCain. He said in a statement, "As you go through life, you meet few truly great people. John McCain was one of them. His dedication to his country and the military were unsurpassed, and maybe most of all, he was a truth teller — never afraid to speak truth to power in an era where that has become all too rare. The Senate, the United States, and the world are lesser places without John McCain."
Copyright © 2018, ABC Radio. All rights reserved.