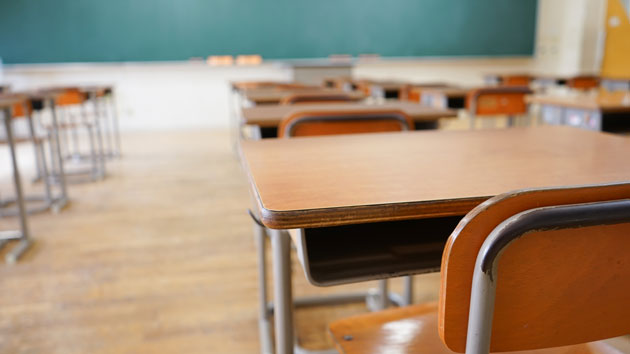 iStock/Thinkstock(CHICAGO) — Parents are calling for the resignation of a Chicago school principal after she said students were barred from wearing certain items of clothing to keep them from being sexually assaulted.
Melanie Beatty-Sevier, the principal of King College Prep in Bronzeville, made the comment linking sexual assault and "provocative" attire at an Aug. 16 meeting of the school's Local School Council, parents present at the meeting told ABC News.
The comments were recorded and later played in front of a gathering consisting of members of the council and of Chicago's Board of Education on Wednesday night. In a video published by the Chicago Sun-Times, the gathering on Wednesday can be seen listening in as Beatty-Sevier is heard in the recording saying, "There have been sexual abuses cases throughout the city of Chicago… Why should we allow students to dress provocatively?"
Her remarks are followed by startled exclamations of "Whoa!," "Come on!" and "What?" by parents in the room.
Chicago Public Schools strongly disagreed with the principal's comments, spokesperson Emily Bolton said in a statement.
“We are evaluating appropriate disciplinary options," she added.
"Supporting students must be the first priority of every principal, teacher and staff member, and comments like these do not align with the district’s values or approach to supporting and protecting students.”
Natasha Erskine, the mother of a 15-year-old sophomore, told ABC News her daughter was also one of the few students in the room at the Aug. 16 meeting, when Beatty-Sevier made the remarks.
"I can't believe that she, a woman, said it in a room full of several students who are going to have to report to her, should they ever become victims of groping or inappropriate behavior or worse, sexual assault," Erskine, who is a member of the school's Local School Council, said.
An investigation by the Chicago Tribune published in June this year found that hundreds of students at Chicago Public Schools had been allegedly sexually abused by school employees over the past ten years. The report prompted the school district to launch a new department dedicated to responding to sexual abuse allegations.
"For her to make that comment for all of the brave young women that stepped forward talking about their incidents of being abused by teachers and staff, for her to reduce it to what they had on, is very concerning to me as a parent," Natasha Dunn, a parent of a 16-year-old junior who was also at the meeting, said.
"I want to be sure that my child's school is going to make students feel safe."
Dunn said the council was calling for Beatty-Sevier's resignation.
Parents said a large part of the principal's dress code, which she had announced at an orientation a few weeks ago, was gender-specific. Girls were instructed not to wear tank tops, spaghetti straps or halter tops, and told their attire must cover them from shoulder to knee.
Erskine said she was deeply concerned not only about Beatty-Sevier's remark but also that she refused to correct them even after they were played at the Wednesday meeting.
"It's been over a week. Miss Beatty-Sevier has failed to apologize, to walk back her statement, to acknowledge that her words were off-color," she said. "Last week, I thought she may have misspoke because no one would say that in 2018. But at the meeting on Wednesday night, she was defiant. She doubled down."
In the Chicago Sun-Times video of the Wednesday meeting, Beatty-Sevier told the gathering she will respond at a later date.
ABC News' calls to Beatty-Sevier's office were not returned.
Erskine said parents had called the two meetings over concerns not just over the dress code, but also over stark changes in school rules the principal had made with harsher punitive responses.
King College Prep made headlines across the country in 2013 when a 15-year-old student of the school, Hadiya Pendleton, was killed in a shooting at a local park, just a few days after she performed with the school's band at then-President Barack Obama's inaugural parade. First lady Michelle Obama visited the school and in an emotional tribute to Pendleton, called for action against gun violence. On Wednesday, a jury pronounced two men guilty on all counts in the murder of Pendleton and the wounding of two other schoolgirls.