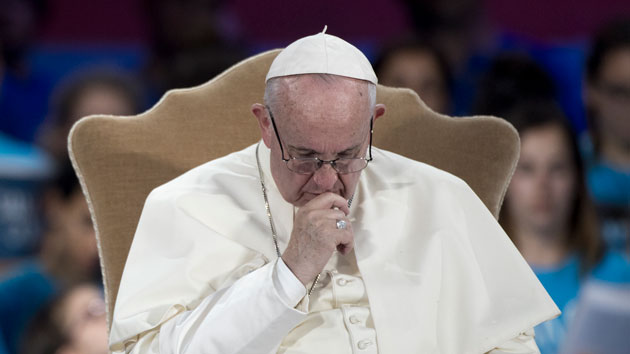 Alessandra Benedetti – Corbis/Corbis via Getty Images(DUBLIN) — Pope Francis is set to visit Ireland in the first papal visit there in almost 40 years, but he is expected to come under pressure there from survivors of clerical sexual abuse.
The pontiff is to arrive at Dublin Airport Saturday, buoyed by an 84 percent favorability rating among Catholics, according to the Pew Research Center.
Even with huge crowds likely to line the streets of Dublin, sexual abuse survivors are calling for an investigation into historical abuse to be funded by the church.
The visit comes during a crisis in the Catholic Church after a grand jury in Pennsylvania last week released a report on an investigation into sexual abuse there. It found that more than 300 priests had abused more than 1,000 children in the past 70 years.
Recent sexual abuse investigations in Chile and Australia have also cast a damning spotlight on the church’s failure to stamp out institutional abuse within its ranks around the world.
In a video that has gone viral on social media before the visit, a victim of sexual abuse gave a powerful response to the 2009 Ryan Commission report, which contained conclusions and recommendations in connection to the government’s investigation of child abuse in Irish institutions.
The man attacked Irish politicians on a panel in a question-and-answer show on RTE, a national broadcaster, saying that as a child he was raped and beaten by priests, and how he continues to deal with the trauma in old age.
Francis will meet victims of sexual abuse Saturday and Sunday, the Vatican has announced.
In an open letter to all Catholics this week, Francis condemned the abuses as atrocities against children.
“With shame and repentance, we acknowledge as an ecclesial community that we were not where we should have been, that we did not act in a timely manner, realizing the magnitude and the gravity of the damage done to so many lives…We showed no care for the little ones; we abandoned them," he wrote.
The pope has been accused of being too slow to react to the sexual abuse crisis gripping the church, something he himself admitted at an advisory panel on child protection in September 2017.