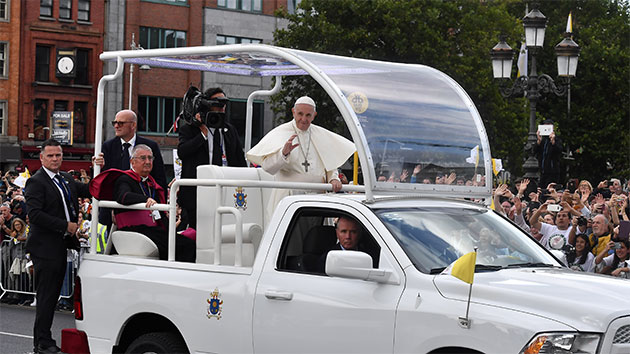 Charles McQuillan/Getty Images(DUBLIN) — Pope Francis marked the first papal visit to Ireland in nearly four decades with a speech acknowledging the "failure" of the Catholic Church to address the "repugnant crimes" of clerical sexual abuse there, which he said has "rightly given rise to outrage."

The pontiff made the remarks at a state reception during the first speech of his two-day trip to Ireland, about two hours after landing in Dublin on Saturday. He spoke in Italian before a large audience of political and religious leaders as well as foreign diplomats inside Dublin Castle.

"I cannot fail to acknowledge the grave scandal caused in Ireland by the abuse of young people by members of the Church charged with responsibility for their protection and education," Francis said. "The failure of ecclesiastical authorities — bishops, religious superiors, priests and others — adequately to address these repugnant crimes has rightly given rise to outrage and remains a source of pain and shame for the Catholic community. I myself share these sentiments."

Francis also mentioned the past remarks of his predecessor, Pope Benedict XVI, who in a 2010 pastoral letter of apology to Irish Catholics "spared no words in recognizing both the gravity of the situation and in demanding that 'truly evangelical, just and effective' measures be taken in response to this betrayal of trust."

The pope was expected to meet with Irish victims of sexual abuse later in the day.

Earlier Saturday, Francis met with Irish President Michael D. Higgins at Aras an Uachtarain, the president's official residence in Dublin. In a statement issued after their meeting, Higgins said he "raised with His Holiness the immense suffering and hurt caused by child sex abuse perpetrated by some within the Catholic Church," as well as the "anger which had been conveyed to him at what was perceived to be the impunity enjoyed by those who had the responsibility of bringing such abuses for action by the appropriate authorities and have not done so."

In May 2009, Ireland's government-mandated Commission to Inquire into Child Abuse released a 2,600-page investigative report that found sexual abuse had occurred for decades in many Catholic-run institutions, including schools and orphanages, and that it was "particularly endemic" in boys' facilities. The report also alleged that those in charge of these religious orders were aware of the abuse and did not act, or moved the perpetrators to other institutions.

A few months later, another government-backed report unveiled by the Dublin Archdiocese Commission of Investigation found that the Archdiocese of Dublin and other Catholic Church authorities in Ireland "covered up" clerical child sexual abuse for decades.

Since then, a majority of Irish voters have approved measures contrary to Catholic teaching, legalizing same-sex marriage and overturning a constitutional ban on abortion.

Francis' trip to Ireland, the first papal visit in 39 years, comes on the heels of a damning report released last week by a grand jury in Pennsylvania that found 300 Catholic priests across the state had abused more than 1,000 children in the past 70 years.

Francis, who has been accused of being too slow to act on the sexual abuse crisis within the Catholic Church, wrote an open letter to all Catholics following the grand jury report, acknowledging and condemning the "atrocities" and calling on the church to do the same.

"With shame and repentance, we acknowledge as an ecclesial community that we were not where we should have been, that we did not act in a timely manner, realizing the magnitude and the gravity of the damage done to so many lives," Francis said. "We showed no care for the little ones; we abandoned them."