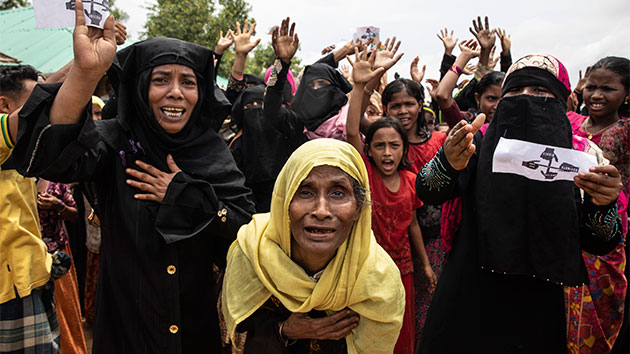 Paula Bronstein/Getty Images(NEW YORK) — The attacks on Aug. 25, 2017, seemed coordinated. Myanmar military units descended on Rohingya villages in what would become a massacre — women and girls raped, men and boys executed and homes burned to the ground.

The Rohingya, mostly women and children, came pouring over the border into Bangladesh in unrelenting waves in the world's fastest growing refugee crisis at the time, with over 700,000 making the deadly journey, the United Nations reported.

One year later, the total Rohingya refugee population in Cox's Bazar, Bangladesh, is close to 1 million. But only one-third of the financial need to aid these victims, many traumatized by the brutal attacks on their families and villages, has been met, and little has been done to hold the Myanmar government to account for the slaughter, human rights groups say.

As the world marks the one-year anniversary of the violent campaign by Myanmar against Rohingya and other ethnic and religious minorities like the Kachin, Shan and others, there are urgent concerns about what happens next.

The U.S., U.N. and others have declared the attacks "ethnic cleansing," but Myanmar, also known as Burma, has denied any wrongdoing, asserting that they conducted a legitimate counterterror operation. Last Aug. 25, there were a series of Rohingya militant attacks on military outposts in the region, but the sweeping crackdown in response was seen as particularly cruel — and even coordinated, according to some human rights groups.

Now, the U.S. and U.N. are weighing whether that coordination makes it a genocide, a particular term that requires proving an intent to destroy an ethnic, national, religious or racial group — and a designation that carries legal implications.

In the meantime, Rohingya men, women and children are stuck in refugee camps in Bangladesh, without official refugee status, at risk of floods and monsoons, and with little hope of returning to their homes in Myanmar's Rakhine state any time soon.

The conditions in those refugee camps in Cox's Bazar are bleak. Situated among a series of hills and vulnerable to floods and severe storms, the camps are overcrowded, with scant health care, no electricity and few facilities like water or sanitation. So far, aid groups on the ground tell ABC News, there has not been major flooding, but the cyclone season will peak this fall.

To address even those basic needs, the U.N. put out a call for nearly $1 billion. One year later, only about one-third of that has been met.

"You can just imagine we are running with very, very limited resources to cater to close to a million people," said Manish Agrawal, the International Rescue Committee's Bangladesh country director.

Psychological services and security remain particularly underfunded, he added, with so many victims of violence traumatized and almost no capacity to deal with those issues.

For many of the children, the horrors of what happened in Rakhine have left them without parents. There are more than 6,000 unaccompanied children in refugee camps, according to Save the Children, which estimates that half of those children have been orphaned, while the others have lost contact with parents.

Beyond the basic needs, longer-term challenges are also now emerging, as adults are largely unable to work and children are not in school — instead sitting "idle."

"To be very frank, we are actually on the verge of losing an entire generation," Agrawal said from Bangladesh, noting little is being done about it, in part because Rohingya refugees do not have official refugee status.

While Bangladesh has been largely welcoming and supportive of refugees, granting official status has been an issue, according to Amnesty International Asia Pacific Advocacy Manager Francisco Bencosme. Blocked from Myanmar citizenship by the government and without refugee status in Bangladesh, the Rohingya are stateless.

The influx of 919,000 refugees, a number estimated by the U.N., has also strained the Bangladeshi government, and aid workers on the ground warn that as pressure increases on resources, so will tensions between local communities and refugees.

For the U.N.-estimated 129,000 Rohingya left in Myanmar, life is no better. Reporters on a recent trip organized by the government found Rohingya forced to live in squalid camps, apartheid-like conditions and without adequate health care or the ability to travel freely.

While the vast majority of Rohingya fled before December 2017, a steady trickle continues even now. U.N. Assistant Secretary-General for Human Rights Andrew Gilmour described the ongoing campaign in March as "a lower intensity campaign of terror and forced starvation that seems to be designed to drive the remaining Rohingya from their homes and into Bangladesh."

Despite international protests, access to northern Rakhine, the epicenter of the violence, is severely limited. Even aid groups that for years had provided health care there are blocked, and in particular, there has been a crackdown on journalists. Two Reuters reporters who uncovered a mass grave have been imprisoned for months now.

"The lack of sustained independent assessments in northern Rakhine means that no one has a comprehensive picture of the situation on the ground," Benoit De Gryse, the Myanmar operations manager for Médecins Sans Frontières (Doctors Without Borders), said earlier this month.

That lack of access is part of why the international community's reaction has been too slow for human rights advocates. Beyond a two-thirds deficit for aid, there has also been little action to punish Myanmar for the ethnic cleansing campaign.

For nearly a year, the U.S. had only sanctioned one top military commander who had been in charge of units in the area. Last week, the Treasury Department took more action, slapping penalties on four Myanmar commanders who led teams that engaged in human rights abuses and two units that conducted attacks.

The U.S. sanctions came after the European Union and Canada led the way with their own sanctions on seven Myanmar military officials on June 25, freezing their assets within European and Canadian jurisdictions and banning them from traveling to Europe and doing business with Canada.

But none of the sanctions targeted the "top echelon" of Myanmar's military, including Senior Gen. Min Aung Hlaing, the commander-in-chief of the Myanmar military.

Many in the West have been concerned about pushing Myanmar too hard because its power-sharing civilian-military government is still young. Ruled by a military junta since 1988, Myanmar only began to transition to democracy in 2011. Now, the two sides split governing with former Nobel Peace Prize winner Aung San Suu Kyi as head of the civilian government — an agreement that led to the U.S. and others relaxing sanctions.

Suu Kyi has faced criticism from the West for a lack of action, though she said in a speech last September, "We condemn all human rights violations and unlawful violence."

But the military remains a powerful force in the country, with Suu Kyi largely silent on the issue or even at times voicing support for Myanmar. Human rights advocates say the military's hold is already too strong and the current outcry is not enough.

"It's difficult to understand what can the Myanmar military do worse than ethnic cleansing and crimes against humanity," Bencoscme said. "Unless the international community starts to hold them accountable and demonstrate to them that there are consequences for their actions … then there's going to be a continuation and cycle of human rights abuses. They'll just act with impunity."

For some, the international community has long been complicit. Fearing retaliation from the government, U.N. groups or other humanitarian organizations have declined to speak too loudly about the long history of discrimination against ethnic minorities.

"Their silence is a key element of Myanmar’s strategy to reduce pressure on itself," Liam Mahony, a longtime humanitarian expert who authored two reports on Myanmar for the U.N., told IRIN, a humanitarian news organization, in July. He called on the U.N. to withdraw aid on a large scale to incentivize Myanmar to cooperate. "The humanitarian community understandably feels responsible for each needy person in front of them, but they are also responsible for the systems of abuse that they support and prolong. It is a difficult decision, but it needs to be taken."

Instead of withdrawing, however, the U.N. signed a memorandum of understanding with Myanmar and Bangladesh earlier this summer to help facilitate the return of Rohingya refugees in a "voluntary, safe, dignified and sustainable" manner and "to their places of origin or of their choosing."

But there are no major efforts to make that a reality because Myanmar has yet to make the conditions right, said Agrawal. They continue to refuse to grant citizenship to Rohingya, to allow freedom of movement, or to open up access for humanitarian services.

"A lot more aggressive efforts are required from countries like the U.S. to put pressure on Myanmar, but so far at this stage, we are not seeing things moving in the right direction," Agrawal added.

That could change next week when the U.S. and U.N. are expected to release fact-finding reports on what happened in the last year and possibly make a determination on whether Myanmar's actions qualify as genocide. Applying that term would require further action, like sanctions or possible criminal prosecutions.

That's the goal of many human rights groups, who hope to build a case to refer to the International Criminal Court. The U.S. and U.N. reports could lay the groundwork for that case, but they are based primarily on interviews with survivors.

Instead, an international investigative mechanism that is given access on the ground could collect and preserve evidence used in criminal cases.

But Myanmar is already taking action to cover its tracks, literally bulldozing the burned-down villages its soldiers destroyed and building new structures over them, according to a recent Amnesty International report.

"Until you get at that question of accountability for the Myanmar military, then you can't address any of these other issues," Bencosme said, including repatriation.

But others say that the push for criminal charges would be disruptive to efforts to solve the crisis by alienating the Myanmar government while their cooperation is still necessary for the Rohingya to return home.

"There is a real danger that talk now of referrals to the International Criminal Court and so on will only become further obstacles to positive outcomes for the Rohingya themselves," said Dr. Anthony Ware, a researcher with Australia’s Deakin University and former director of the Australia Myanmar Institute.

Instead, Ware added, justice "should be determined by the people themselves and should come after some sort of negotiated solution."

Human rights groups, however, say that justice cannot come from the people alone, especially because many in Myanmar’s ethnic majority groups share the military's disdain for the Rohingya. Leaving Myanmar to handle the Rohingya issue on its own has led to this violence in the first place.

Either way, it's clear that global engagement will be necessary to keep the spotlight on the issue and effect some sort of change from the dire status quo.

"This is not going to be a short-term refugee crisis," said Bencosme. "It's going to require long-term engagement by the international community."