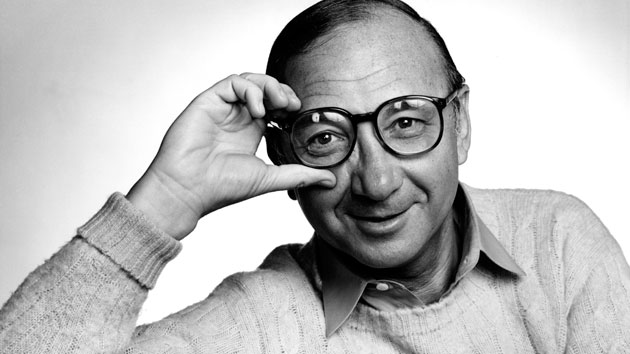 Neil Simon in 1982; Jack Mitchell/Getty Images(NEW YORK) — Neil Simon, inarguably one of America’s greatest-ever playwrights and renowned the world over, has died at age 91.

Simon’s publicist confirmed his death to ABC News, saying he died Saturday night of complications from pneumonia at New York Presbyterian Hospital, with his wife and two daughters at his bedside.

With a Broadway career that included more than 30 plays and musicals and nearly as many film screenplays — many of which were adaptations of his stage plays, and vice-versa — it was at comedy that Neil Simon excelled. His best-known works include classics like The Odd Couple, Barefoot in the Park, The Goodbye Girl, Biloxi Blues, Plaza Suite, They’re Playing Our Song and more.

Born in the Bronx, New York, Simon began his career writing radio and TV scripts, including being a member of the legendary writing staff for Sid Caesar’s Your Show of Shows that included Mel Brooks and Carl Reiner.

Simon made his Broadway writing debut in 1961 with Come Blow Your Horn but became a sensation with the back-to-back debuts of 1963’s Barefoot in the Park, starring Robert Redford and Elizabeth Ashley, and 1965’s The Odd Couple, starring Walter Matthau and Art Carney, both directed by the legendary Mike Nichols. In 1966, Simon had four plays simultaneously running on Broadway.

The Odd Couple, perhaps Simon’s best-known work, earned him his first of four Tony awards and spawned both a hit film three years later and a classic TV series beginning in 1970, the latter starring Jack Klugman and Tony Randall as mismatched divorced roommates Oscar Madison and Felix Unger. There were two TV revivals, the most recent starring Matthew Perry and Thomas Lennon that ran for three seasons on CBS thorough 2017.

In addition to his Tony Awards, Simon’s career honors include a Golden Globe award, the Pulitzer Prize and the Mark Twain Prize for American humor. Simon also was a Kennedy Center honoree in 1995.

Neil Simon is survived by his wife, two daughters, three grandchildren and one great-grandchild.