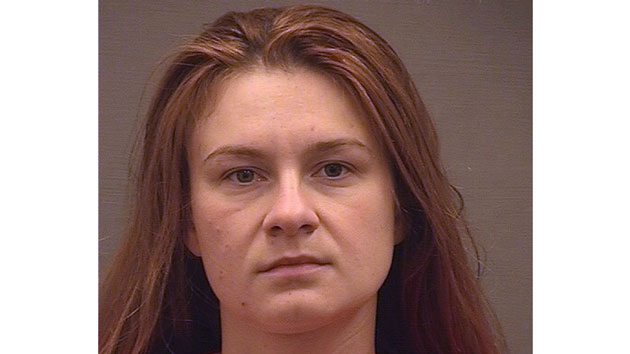 Alexandria Sheriff's Office via Getty Images(WASHINGTON) — In a new court filing, the lawyer for accused Russian agent Maria Butina claims that the government overstated its claim that Butina offered “sex in exchange for a position within a special interest organization” as part of a bid to gain access and make contacts in American political circles.
“The impact of this inflammatory allegation, which painted Ms. Butina as some type of Kremlin-trained seductress, or spy-novel honeypot character, trading sex for access and power, cannot be overstated,” her defense lawyer, Robert Driscoll, wrote.
Driscoll argues that the government's assertion that Butina is a “Kremlin-trained seductress” is void because they say she was joking during the text message exchange on which the government has based its claim.
Butina was indicted in July on charges of acting as a foreign agent and conspiracy. She has pleaded not guilty to all charges.
“The only evidence the government relied on for its explosive claim was an excerpt from an innocuous three-year-old text exchange sent in Russia between Ms. Butina and DK, her longtime friend, assistant, and public relations man for The Right to Bear Arms gun rights group that she founded," the defense filing reads. "DK" is not identified.
According to Driscoll, the text message exchange in question began after “DK” took Butina’s car “for its annual government-required inspection and insurance renewal” in Russia.
"I don’t know what you owe me for this insurance they put me through the wringer,” DK wrote Butina after returning her car.
Butina replied, “Sex. Thank you so much. I have nothing else at all. Not a nickel to my name.”
Driscoll asserts that the reference to sex is "clearly a joke."
"There is no indication that the two ever had sex, as the exchange was nothing more than a long-running joke between old friends,” Driscoll wrote. “Indeed, DK would apparently tease Maria repeatedly about the fact that he would never sleep with a redhead, and Mr. Erickson knew of this jovial banter and their ongoing friendship.”
"Mr. Erickson" refers to the person the government argues Butina had "cohabited and been involved in a personal relationship” with “for the sole purpose of developing her alleged influence operation.” While not named in government filings, he was later identified as Paul Erickson, a longtime GOP operative with ties to the National Rifle Association.
Several attempts to reach Erickson and the lawyer said to be representing him have been unsuccessful.
In court filings, the government says "U.S. Person 1 worked with Butina to arrange introduction to U.S. persons having influence in American politics,” including high-ranking members of the NRA and organizers of the National Prayer Breakfast, “for the purposes of advancing the interests of the Russian Federation.”
Driscoll argues that Butina is not a criminal rather a "young woman of good character and with genuine ties to the United States through her five-year relationship with Erickson, her academic work and he desire to pursue a career in the United States."
Driscoll says that because Butina did not act covertly there is no reason to suspect that she was a covert agent.
"The assertion that she was arrested for an alleged 'role in a covert Russian influence operation in the United States' is a war drum based on pure fiction. Nothing about her activities in the United States were covert or clandestine," it reads.
They also provide evidence that Butina applied to numerous other schools including schools outside of Washington, D.C., including Harvard and Tufts in Massachusetts.
Her defense team is asking for her to be released on home confinement. She is currently in jail in Alexandria, Virginia.
The U.S. Attorney's office offered no comment on the latest filings.
The reason why Butina is in jail is because prosecutors say she is a “serious” and “extreme” flight risk, “based on her history of deceptive conduct, the potential sentence she faces, the strong evidence of guilt, her extensive foreign connections, and her lack of any meaningful connections to the United States.
The judge agreed.
Butina is due back in court on September 10 for a status conference.

Gwyneth Paltrow reveals how she talks safe sex and healthy relationships with her teenagers
“I’m like an old, classic car”: Ricky Gervais talks aging, awards shows, and why we can’t take a joke
Ray J responds to rumors of a second sex tape with Kim Kardashian: “This ain’t cool”
‘Sex and the City﻿’ star Willie Garson passes away at age 57
Lawyer whose firm represented Clinton campaign indicted by special counsel investigating Russia probe
Where is Dulce Maria Alavez? Age-progression photo released two years after her disappearance