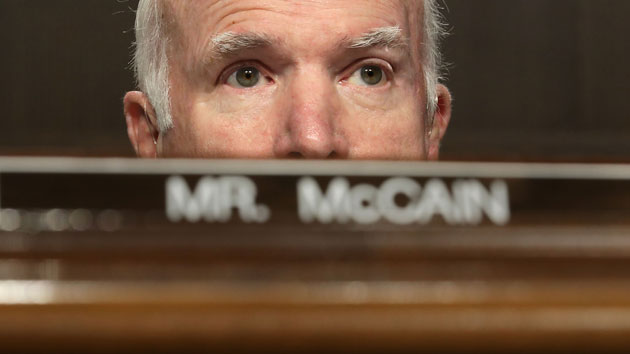 Chip Somodevilla/Getty Images(WASHINGTON) — With the news that Arizona Senator John McCain has passed away due to complications from brain cancer, the speculation over who will succeed him in the position he has held since 1987 has begun in earnest.
The timing of McCain’s death results in a complicated process that could end up in a court battle in a state that will be key to determining the balance of power in the U.S. Senate this midterm cycle.
According to Arizona state law, the governor appoints a replacement for any vacancy in a U.S. Senate seat who will hold it until the "next eligible general election."
That person must belong to the same political party of the person who held the seat.
That means Doug Ducey, Arizona's Republican governor, would appoint a Republican to fill McCain's seat until the next general election or until the governor decided to call a special election.
However, the most important piece of state law in this situation is that the candidate filing deadline for the election cannot be fewer than 90 days before a primary for that special election.
State law stipulates that the vacancy "must occur sufficiently before" that deadline to gather signatures to get on the primary ballot.
Since the Arizona primaries will be held this Tuesday, the filing deadline for candidates would have had to have been May 30 for a special election to comply with state law.
So even though the next general election in Arizona is in November, the timing of McCain’s passing likely ensures that whomever Ducey appoints to replace him will serve until 2020, the next general election year.
Matt Roberts, the communications director for the Arizona Secretary of State, confirmed to ABC News that Ducey plans to appoint a replacement that will serve in McCain’s seat until 2020.
Democrats could challenge that relevant portion of state law to try and force a special election in 2018, which would put both of the state's Senate seats up this cycle since retiring Sen. Jeff Flake's seat is also up.
A special election this year would force Republicans to defend two Senate seats this cycle in a state Donald Trump won by just four percentage points in the 2016 presidential election.
Copyright © 2018, ABC Radio. All rights reserved.