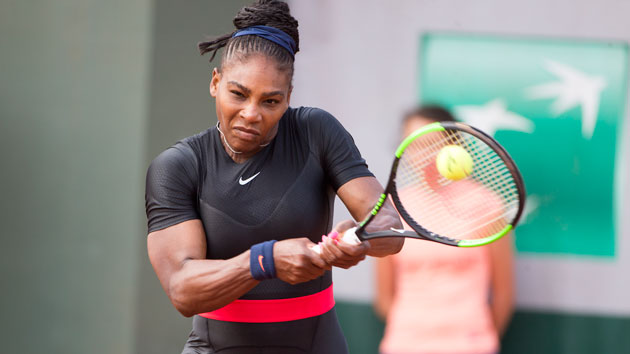 Tim Clayton/Corbis via Getty Images(PARIS) — The French Open appears to be sidelining Serena Williams' famed catsuits, with the tournament's chief saying they "would no longer be accepted."
The tennis pro, 36, wore the Black Panther-inspired bodysuit earlier in May to mark her return to her first major tournament since giving birth to her daughter last year.
But, in an interview with Tennis magazine Thursday, French Open president Bernard Giudicelli said Williams and other players will have to dress more conservatively in future tournaments.
According to the U.K. newspaper The Independent, he singled out Williams in an interview today, saying, "I believe we have sometimes gone too far. Serena’s outfit this year, for example, would no longer be accepted. You have to respect the game and the place."
Besides allowing Williams to feel like a queen from Black Panther's fictional Wakanda, she said the fitted suit was designed to protect her against blood clots. Williams did not immediately respond to a request for comment.
After giving birth to Alexis Olympia last September, Williams revealed that she dealt with life-threatening complications related to a pulmonary embolism.
At the French Open, Williams told reporters that the suit was more than just a fashion statement.
"I had a lot of problems with my blood clots, and, God, I don’t know how many I have had in the past 12 months. So it is definitely a little functionality to it," she said.
"I have been wearing pants in general a lot when I play, so I can keep the blood circulation going," she added. "It’s a fun suit but it’s also functional, so I can be able to play without any problems."
Williams, who just arrived in New York for the U.S. Open, has not yet commented on Giudicelli's remarks. But on social media, "French Open" was a trending topic as fans reacted critically to the tournament president's remarks, calling them misogynistic and even racist.
Copyright © 2018, ABC Radio. All rights reserved.